A major row has broken out about whether plants emit methane, a potent greenhouse gas.

The startling claim that trees could be responsible for putting millions of tonnes of methane into the atmosphere every year was published last year in the prestigious journal Nature. But that has now been rubbished by rival researchers who report that plants emit virtually no methane whatsoever1.

Tom Dueck, of Wageningen University in the Netherlands, says his team’s independent investigations are the first published results to show that plants’ methane emissions are negligible or zero. That means their contribution to the global methane budget, and potentially to climate change, simply isn’t worth worrying about.

But Frank Keppler, now at the Max Planck Institute for Chemistry, in Mainz, Germany - whose team announced in January 2006 they had detected methane exhaled from living plants2 - is sticking to his guns. ’I am one hundred per cent confident that plants emit methane’, he told Chemistry World, insisting that as yet unpublished research would confirm his findings once and for all.

Keppler’s unexpected discovery has stirred up heated debate among biologists and atmospheric chemists over the past year. Though bacteria in soil or decaying matter produce methane in anaerobic conditions, there seems to be no reason - or mechanism - for living plants to emit the gas in an oxygen-rich environment. The implications of the findings are worrying: on a global scale, Keppler estimated, methane emissions from plants and trees could amount to hundreds of millions of tonnes a year, throwing scientists’ understanding of the greenhouse gas’s sources and sinks way off kilter.

Since last year, many researchers have questioned that global impact, suggesting that Keppler’s scale-up calculations, based on methane emission per unit of metabolically active mass of plant, were a gross overestimate. Yet until now, no published research has questioned Keppler’s central discovery that plants can emit methane in the first place.

Now Dueck’s team suggests that claim was also suspect. The Dutch group didn’t repeat Keppler’s experiment exactly, Dueck said, ’because it was not methodologically sound’. Instead, his team boosted the sensitivity of their methane measurements by growing plants in an atmosphere saturated with a heavy carbon isotope, 13C. If the plants subsequently emitted methane (13CH4), it would be easy to spot above the background of light (12CH4) methane in the air. Photo-acoustic spectroscopy (a laser-based measuring technique) was used to detect the gas; it showed that even a large mass of plants produced negligible methane emissions - at most 0.3 per cent of Keppler’s values.

So if Dueck’s team is correct, where did Keppler go wrong? Dueck suggests that Keppler’s team might have forgotten that gas trapped in plants’ intercellular spaces, and in air pockets in the soil, could diffuse out and be counted as ’emitted’ by the plant in their experiment.

But Keppler denies this, saying that this sort of methane desorption could only be partially responsible for the amounts of gas he found. Indeed, he suggests that Dueck’s use of heavy isotopes may have actually changed the plants’ metabolic preferences, killing off their methane emissions. Dueck counters that no literature reports suggest this might be a problem. 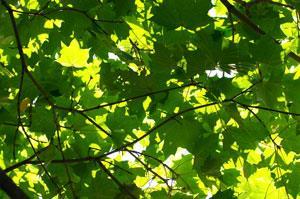 Leafing through the methane controversy

Keppler’s own work has stalled since last year, as a consequence of moving labs and changing team members, he said. But he told Chemistry World that other researchers had backed up his claims in work yet to be published, and that he was investigating a biological pathway by which plants could produce methane - something that would really convince the sceptics. Yet other scientists contacted by Chemistry World  said they too were about to publish work which showed plants emitted no methane at all. ’Some research groups say nothing is going on, and an equal number say Keppler is absolutely right,’ summarised one researcher, who declined to be named as their own   research publication on the topic is currently under review.

The main problem with answering what seems to be such a simple question - do plants emit methane? - is that measuring methane emissions at such tiny rates is a huge technical challenge, said David Beerling, of Sheffield University, UK. The debate looks likely to rumble on for some years, Keppler conceded.

Two scientists contacted by Chemistry World both compared the current situation to the atmosphere of the 1989 cold fusion debate. As they point out, one group has announced a sensational and unexpected finding, which hasn’t yet been independently replicated. Keppler admits his discovery was hardly ’in the textbook’, and understands that people have difficulty accepting it.

Even if the final consensus is that plants do exhale the greenhouse gas, its implications for climate change are still uncertain. The latest study to estimate the overall impact on the Earth tones down the global plant methane budget to 20-60 million tonnes a year3, far less that the 60-240 million tonnes originally predicted by Keppler.

One rare point of agreement is that the story is far from over. ’I don’t think anyone will accept [our study] as conclusive - and I hope other groups will continue to do more work,’ said Dueck.