British archaeologists have revealed the secret of the exceptionally heat-resistant crucibles that were exported all over the world from Hesse, now in modern Germany, by the 15th century. Successful Hessian manufacturers of the time were cheerfully unaware of the science behind their internationally renowned mixing vessels. But the secret, we now know, was mullite: a material widely used in modern ceramics, first described in the 20th century.

In the Middle Ages, the centrepiece of any self-respecting alchemist’s laboratory would have been a Hessian crucible, a pot that could withstand the feverish heating and stirring required to transmute base elements into gold. By the 15th century, says Marcos Martin?n-Torres, of University College London, UK, Hessian crucibles dominated the international market, reaching Scandinavia, Britain, Portugal, and even America. In 1755, the Royal Society of Arts organised a special meeting in London to complain about the costs of importing millions of superior Germanic crucibles.

Martin?n-Torres’ team have now analysed Hessian and other crucibles from archaeological sites in Europe and America. Scanning electron microscopy and x-ray diffraction revealed a matrix of mullite needles - an aluminium silicate material nowadays used in building materials, for heat-protection systems, and in the lining of aircraft engines. 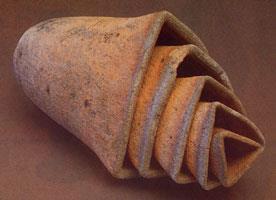 A nest of triangular crucibles recovered in Hesse

The mullite probably crystallised from the decomposition of aluminium-rich kaolinite clay at temperatures over 1100?C, as crucibles were fired in the potter’s kiln, says Martin?n-Torres. ’Mullite is extremely resistant to thermal, chemical and mechanical stresses, and that’s what made the crucibles so fit for their functions,’ he said, pointing out that such strong vessels made possible the early discovery of some chemical elements, such as antimony and bismuth.

’Although unaware of the presence of this aluminium silicate in their Hessian crucibles, the producers evidently coined a very successful recipe - which explains why it was not modified, or publicised, for centuries,’ the researchers conclude. Hesse is not uniquely blessed with kaolinite clay, added Martin?n-Torres; other nations might have produced the crucibles themselves from readily available raw materials, if they had only been able to obtain the recipe.