Scientists in Slovakia campaign against diversion of funding

1.2 billion EU package allocated for Slovak research for 2007 to the end of 2013. Its diversion would represent a cut of around 30 per cent in EU research funds for the remaining three years of the program, according to the Slovak Academy of Science (SAS). The Slovak government also intends to divert to road construction

60 million allocated to education by the EU. Both plans need approval by the European Commission (EC), but in the past it has approved similar requests. 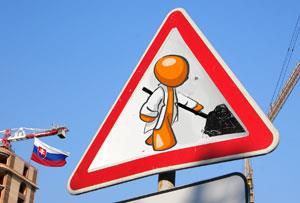 Igor Lac?k, director of the Bratislava-based Polymer Institute, is one of nearly 10,000 people who have signed an online petition urging the government to reverse its decision - and urging the European Commission to deny the request if it doesn’t. So far, fewer than 200 signatures have come from abroad, he says, adding: ’We are hoping for more support from around the world.’

Lac?k acknowledges that some parts of the transport infrastructure of Slovakia, which has a population of 5.5 million, are in bad shape. However, he says science and research infrastructure has already suffered from a lack of money. ’We hope and dream to have the same conditions for working as scientists in other countries have.’ He cites the high-standard research conditions in Vienna and Munich, in both cases just a short drive over the border.

His institute, which employs 45 scientists, has received

1.2 million of EU money during the last two years. He says the

Slovak spending on science and research now amounts to only about 0.48 per cent of gross domestic product, below the EC target of 3 per cent for EU member states by 2020.

In the same February cabinet meeting in which the funding decision was made, the government stressed its commitment to bolstering Slovakia’s knowledge-based economy, appointing Martin Bruncko to coordinate such efforts. Bruncko told Chemistry World the diversion of research funds was ’unfortunate,’ adding: ’What is needed for the long-term is investment in research and development.’