Two thousand people joined a rally outside the UK Treasury in London on Saturday to protest against the government’s plans to slash research funding as part of measures to cut the budget deficit.

The demonstration was organised by campaign group Science is Vital, established just one month ago in response to a comment by business secretary Vince Cable that 45 per cent of research grants in the UK went to research that was not considered ’excellent’. He said the bar would have to be raised as budgets were squeezed. 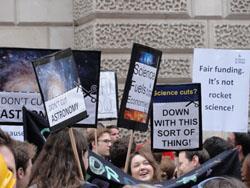 ’He got his sums wrong for a start,’ says former research scientist Richard Grant of Science is Vital. ’He misread the data - most of British science is of international quality. We are already doing a lot with our funding, far more than any other country when you look at how many scientists we’ve got and how many papers we publish.’

Over 25,000 people have now signed the Science is Vital petition, calling on the government not to reduce science funding as a result of the Comprehensive Spending Review (CSR), which in a week and a half’s time will reveal the government’s spending plans for the next four years. While Cable has previously dismissed suggestions that the research budget could be cut by 35 per cent as ’way in excess’ of figures being discussed, all government departments have been warned to prepare for cuts of 25 per cent.

’Cutting funding to science will backfire because it is precisely the research we do, the development, the innovation and the tech, that fuels the economy,’ said Jenny Rohn, a cell biologist at University College London, UK, whose blog post in response to Cable’s comments planted the seed that grew into the Science is Vital campaign. ’We can’t just hide in our labs any more. We want to send a message to politicians that if they persist in their idea of dismantling UK science there will be a political price to pay.’

A case of ’special pleading’?

With the British economy in a frail state, claiming that scientific research should escape the CSR unscathed could be seen as unrealistic and narrow minded: if science is protected, other budgets will be forced to take a greater hit. ’Scientists are just like everyone else - we want good public schools, we want good hospitals,’ says director of the Campaign for Science and Engineering, Imran Khan. ’But we know that if the UK wants to get there it’s not going to do it by competing on cheap labour or digging more things out of the ground. It has to be a high-tech, modern economy that’s forward looking.’

Cutting the science budget now will force talented young researchers to look for jobs elsewhere in the world says Khan, in countries like the US, Germany or China whose governments are investing heavily in science. ’By the time the government realises just how bad it is five years down the line, it’s going to be too late - it’s going to be really hard to bring that talent back and reinvigorate our science base.’

A view from the lab 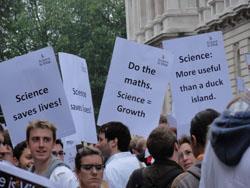 ’In the case of universities they’re even talking about 75 per cent off our teaching budgets - there is no way we can survive that,’ says Andrea Sella, a lecturer in inorganic chemistry at University College London, UK, who came to the UK in 1986 after studying at the University of Toronto in Canada. ’All the evidence shows that UK science is amongst the most efficient in the world, so the idea that we’re going to be able to salami slice ad infinitum doesn’t wash.’

Researchers in university departments already have very little administrative support, says Sella, so the idea that there is a significant amount of fat that can be trimmed is misguided.

’People are really scared,’ says Science is Vital’s Grant. ’If you close a thousand university departments you’re going to have tens of thousands of people out of a job. We’ve only just got science funding levels from the government back up to the level they were in 1986 and people are worried - they’re looking to move abroad, they’re looking at other careers.’

Put it this way, I’m moving to Japan

After completing her PhD in Bristol last year, Zoe Schnepp moved to Germany to take up a placement at the Max Planck Institute of Colloids and Interfaces in Potsdam where she’s researching simple synthetic routes to make complex metal nitrides and carbides.

She says the opportunities in Germany are very good, and it wasn’t hard to find a position. ’With the situation in the UK descending rapidly, a lot of people advised me that if I do ever want a long-term position in the UK I need to have the best possible CV, and in science one of the best ways of doing that is to travel to other institutions in other countries.’

Initially her plan was to only spend a year or so in Germany, but the situation in the UK has made her reconsider her options. ’Put it this way - I’m moving to Japan next year,’ she says. ’It’s pretty bleak. Actually applying for a position in the UK at the moment is impossible. There are adverts for PhDs and postdocs, but there are no permanent positions - you can’t do a postdoc indefinitely if you want to have a long-term career in science.’

Schnepp supports the aims of the Science is Vital campaign, and says it’s important that the UK retains its position at the top of the global research base. ’I’m early in my career, but I’ve worked in Germany, the US and the UK, and UK science has a really good reputation with a really nice combination of creativity, expertise and excellence. It would be a real shame if people started to move overseas and the UK lost a lot of that excellence.’

Too little too late?

In a 2004 report that set out the government’s 10-year plan for science and innovation, the Treasury highlighted the ’direct benefits to the economy as a whole and to firms individually’ to be gained from investment in science, and emphasised that ’high quality research and personnel in the UK science base must be maintained’. It also explicitly noted that the UK achieves ’excellent research performance’ with relatively low input, generating a large number of PhDs and significant research and development activities.

The government currently distributes around ?4 billion in science funding, a figure that looks set to be revised sharply downwards if Cable’s suggested cuts materialise as feared. But with less than two weeks until the CSR sets out the four-year spending plans, chancellor George Osborne and Cable are reportedly still battling over the science budget, giving the protesters hope that their campaign could yet have an impact.

’One of the characteristics of 21st century politics is the idea that it’s enough to go online and simply sign a petition and somehow you’ve helped with world hunger or you’ve defeated climate change,’ says Sella. ’That’s ridiculous - people have to get out there, stand up and be counted.’

It’s a sentiment echoed by Grant: ’This is the first major demonstration there has been about funding cuts. We think we can make a difference - we wouldn’t be here if we didn’t.’

University teaching bears the brunt of cuts to higher education funding while science is afforded a degree of protection, according to latest Hefce figures