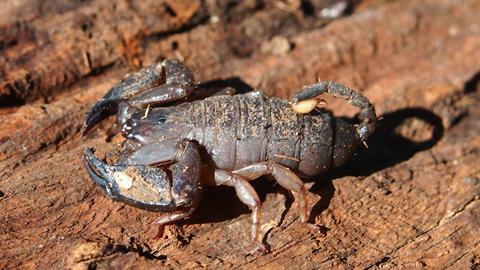 Scorpion fine-tunes its venom to ward off predators

Australian species can increase production of toxins that affect mammals

The Australian rainforest scorpion (Liocheles waigiensis) has been found to be able to tweak the chemical profile of its venom following just weeks of exposure to a predator. The scorpion appears to do this to tailor its cocktail of venom toxins to deter predators that threaten it, rather than to hunt its preferred prey, insects.

The researchers presented scorpions in the laboratory with a taxidermied mouse to mimic a mammalian predator in the wild. They simulated mouse attacks on the scorpions three times a week for five weeks.

Tobin Northfield, one of the researchers behind the new work at James Cook University in Cairns, Australia, says that the interesting thing about this venom cocktail is it contains toxins to deter predators, as well as immobilise prey. This balance shifts in favour of the defensive portion of the venom when scorpions are essentially scared by the predators, he adds.

‘If you think about it, this makes perfect sense for the scorpion, which tries to use its venom as efficiently as possible,’ remarks Volker Herzig, a venom researcher at the University of Queensland, who wasn’t involved in this research. Herzig says he is not aware of any other study that provides evidence of predator-induced changes in venom over just a few weeks. However, he adds, more work is required to get a detailed picture on the individual toxins whose production is up- or down-regulated.

Northfield’s team plans to do exactly that in future. In addition to identifying and sequencing the proteins and peptides in the venom, the team wants to explore what effect each has on mammalian cells, as this could have therapeutic implications for humans.

Justin Schmidt, author of The sting of the wild, says this investigation opens the door to exciting new frontiers in animal defences. ‘At least one animal species can respond within its lifetime to varying threats by predators,’ he says. The study will need to be repeated in other venomous animals, he adds, to determine if inducible defenses are widespread.