The industrial history of central Scotland over the past 2500 years has been traced by a team of Scottish researchers measuring lead and antimony in peat bog cores.

The industrial history of central Scotland over the past 2500 years has been traced by a team of Scottish researchers measuring lead and antimony in peat bog cores.

John Farmer at the University of Edinburgh and his group probed Flanders Moss, an ombrotrophic peat bog in central Scotland. All the water, nutrients and pollutants in these bogs originate from precipitation alone, and so act as a record of the atmospheric concentrations of metals over the years. 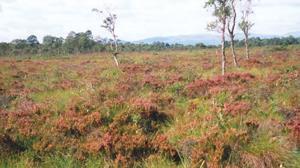 Using mass spectrometry and atomic emission spectrometry, the team measured the concentrations of lead and antimony in cores taken from the bog. They identified man-made sources of lead and antimony by comparing the levels of the two elements and of various isotopes of lead. This, when combined with radio-isotope dating, gave a time-line tracing the industrial history of the area.

The team uncovered 2500 years of history, beginning with pre-Roman era lead mining and smelting, moving through Mediaeval metallurgy and the Industrial Revolution to the present day. Between 1920 and 1960, when coal use was at its maximum, lead and antimony levels peaked at 50 to 100 times their baseline level. Since the 1980s, the introduction of unleaded petrol has led to a steady decrease in lead levels. However, new sources of antimony like automotive brake linings and plastics have recently appeared; antimony is often added to these for its heat resistant and flame retardant properties.

Farmer believes that the Flanders Moss study adds to the growing concern among environmental researchers that the toxicological threat from antimony may have been underestimated and that consequently further investigation is needed.