Scrunched up graphene to store hydrogen

Corrugated graphene could be used as an inexpensive and efficient way to store hydrogen, according to theoretical calculations by scientists in Italy. Computer simulations suggest that certain areas on the buckled sheets should bind hydrogen preferentially, releasing it spontaneously when the deformations in the graphene layers are reversed.

Hydrogen storage is a hot topic of research given that hydrogen is a prime candidate for providing the energy for fuel cells in the future. While many elegant solutions have been proposed, often the sticking point is how to extract the hydrogen once it has been stored - large, energy-hungry changes in temperature and pressure are usually needed. 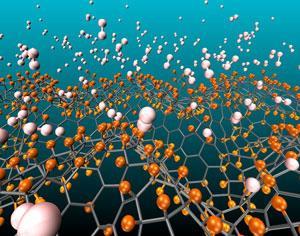 Now, Valentina Tozzini and Vittorio Pellegrini of NEST, the Nanoscience Institute of the Italian National Research Council, and Normal School, have used density functional theory and molecular dynamics simulations to show that distorted sheets of graphene - single layers of carbon atoms in a honeycomb configuration - might provide another approach.

The team’s calculations suggest that if layers of graphene are compressed laterally to form corrugations, hydrogen would find it energetically favourable to chemically bind to the convex tops of the ridges. In flat sheets of graphene, carbon’s electronic orbitals are sp2 hybridised. If the sheet is buckled, the orbitals at the convex surfaces assume a geometry closer to sp3 hybridisation - which hydrogen finds attractive. ’Hydrogen has a greater affinity for the convex side because of the geometry,’ says Tozzini. ’If there was no distortion at all in the lattice, some hydrogen would bind but at a much lower affinity. We find that the binding energy is proportional to the local curvature, so that by reversing the curvature we can also detach the hydrogen.’ If the corrugations are reversed - the ridges becoming furrows and vice versa - the bound hydrogen spontaneously detaches. 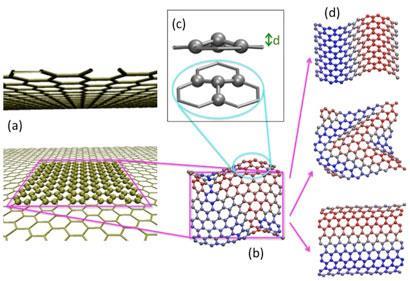 The team is now examining ways of creating controlled corrugations in multilayered graphene in the lab and investigating how to reverse the distortions. ’One way might be to have mechanical transducers on either side of the sheets which could propagate a wave along the sheets a bit like two people shaking a dusty carpet,’ says Tozzini. ’As the ripple travels and reverses the corrugations the hydrogen would fly off like dust.’

Neil Champness, who researches hydrogen storage systems at the University of Nottingham in the UK, says: ’The concept of bending graphene sheets to increase the interaction between the sheet and hydrogen followed by straightening the sheet to release the hydrogen is simple but clearly has great promise. Although the study is only theoretical at the moment the ideas put forward will intrigue many working in this field and hopefully someone will be able to put it into practice.’