British geochemists have uncovered evidence that sea water incorporates noble gases into the Earth’s mantle, overturning current theories of how noble gases are transported beneath the crust. 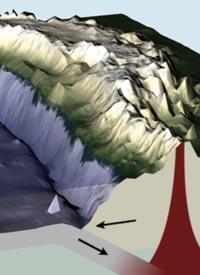 Earth scientists have always assumed that noble gases such as xenon and argon cannot be incorporated into the mantle during subduction (when one of the Earth’s tectonic plates slides under another). Instead, any noble gases brought into the mantle by subducting crust and sea water are simply returned to the surface by volcanic activity.

Testing whether this ’subduction barrier’ actually exists has proved tricky, because of the difficulty of obtaining accurate estimates for the concentration of noble gases in the mantle (which begins 30km beneath the surface). Scientists have had to infer these concentrations by analysing noble gas isotopes in rocks derived from the mantle or gas from deep gas fields. These analyses suggest that 90 per cent of the noble gases in these rocks and gas fields are derived from atmospheric contamination, rather than the mantle.

Now, two geochemists from the University of Manchester have analysed the ratio of three different isotopes of xenon - one natural, two derived from the radioactive decay of heavier elements - in gas from a natural gas field in New Mexico, US.

They found that atmospheric contamination only accounts for half the supposedly non-mantle xenon, with the other half intrinsic to the mantle. This xenon has a similar isotopic profile to that of sea water, suggesting that sea water delivered the noble gas to the mantle.

In an associated News and Views article, Takuya Matsumoto, a geochemist from Osaka University, Japan, comments that the researchers’ conclusions seem robust, but that ’there are also many unresolved issues about the feasibility of deep air recycling’.