After seven years of work, a team of chemists based in four labs across the globe has successfully prepared a cocrystal previously believed to be unobtainable.

Cocrystals are crystalline materials composed of two or more molecules held together within the same crystal lattice. Cocrystallisation is significant in the pharmaceutical industry, where drug molecules are screened for cocrystal formation in order to improve their solubility, stability and bioavailability. This has the added advantage of increasing the number of crystal forms that can be considered for drug formulation while simultaneously maximising patent protection.

Despite a computational study suggesting a stable cocrystal should form between caffeine and benzoic acid, all previous attempts over the last 60 years have failed. ‘When a cocrystal doesn’t form, we like to understand why that is – patients could miss out on better medical treatment if we miss out on crystal forms,’ says Dejan-Krešimir Bucar at the University of Cambridge in the UK, who led the study. ‘We hypothesised that a kinetic barrier hindered cocrystal formation, so our idea was to add a molecular species similar to that found in the nucleus of the caffeine·benzoic acid cocrystal as a seed to facilitate crystallisation. The first thing that came to mind was to replace benzoic acid with a fluorobenzoic acid derivative, because fluorine and hydrogen are so similar in size.’ 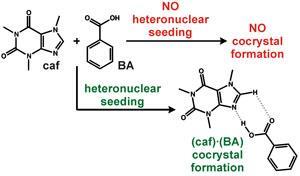 Once the heteronuclear seeds had been used in the lab, the cocrystal formed regardless of whether or not the seeds were used

Curiously, once the seeds had been introduced into the lab, the cocrystal formed regardless of whether or not they were used in the crystallisation experiments. The team found they were unable to replicate their negative results, even after purchasing new samples and glassware. ‘It is really baffling,’ says Bucar. ‘Once the cocrystal is formed, the laboratory becomes contaminated and this prevents any further studies, meaning we needed to move our experiments to other uncontaminated laboratories.’

Andreas Lemmerer, an expert on pharmaceutical polymorphs and cocrystals from the University of the Witwatersrand in Johannesburg, South Africa, says that ‘although the kinetic arguments are not yet well established, this combination of computational study and carefully replicated and thought-out laboratory experiments should encourage researchers to pursue previously unsuccessful attempts at a target cocrystal.’