The formation of organic molecules is a natural and inevitable part of the planet-forming process, modelling work suggests

Organic molecules that were the potential precursors of life on Earth could have been synthesised in a part of the cosmic environment hitherto considered to be chemically inert. The findings imply that the organic chemistry required to produce the necessary molecules for life is part of the normal processes of planet formation.

Complex organic molecules have been found in meteorites and particles from comets, and it is thought that this is one way that they may have been delivered to the prebiotic Earth. However, the origin of these molecules remains unknown. One possibility is that they were formed in the vast interstellar dust clouds that collapse to create the stars and planets. Now, Fred Ciesla of the University of Chicago, US, and Scott Sanford of the Nasa Ames Research Center, US, have demonstrated that there is another possible source for these compounds. 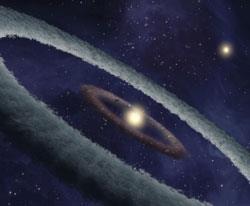 When an interstellar cloud collapses to form a star, a disc of dust and ice grains remains around the star and these small particles can eventually clump together - or accrete - to form planets. This cloud, called the solar nebula, has generally been thought to be chemically incapable of generating organic compounds. The ice particles, lying in the freezing outer edges of the solar nebula and containing molecules such as ammonia, carbon dioxide and hydrogen, were considered to be exposed to insufficient high-energy ultraviolet (UV) radiation - the source of energy for the chemical reactions to produce these molecules for life.

Now, Ciesla and Sanford have borrowed particle-modelling techniques from areas such as pollutant tracking to show how individual grains of ice within the solar nebula could indeed be hit by enough high-energy UV photons for this chemistry to take place. ’This is a very dynamic, turbulent and chaotic environment,’ says Ciesla. By factoring in variables such as the particle mass, temperature, pressure, the density of the cloud, UV fluxes and so on, the researchers were able to show that any given particle could be lofted into a point in space where it could be exposed to a brief burst of high-energy UV, sufficient to snap chemical bonds in the frozen molecules to create ions and radicals. The particle could then be buffeted to an area of elevated temperature to allow new bonds to form.

Laboratory studies have shown that exposure of such ice particles to UV in this way can produce a range of organic molecules. ’Under very low pressures and temperatures you can create so-called astrophysical ices containing water and carbon- and nitrogen-bearing molecules,’ Ciesla says. ’You turn on the UV lamp and bombard the ice particles with UV photons, turn off the lamp, warm the particles up a little and analyse them.’ In this way, complex organics can be formed, such as amino acids, quinones and nucleobases. While the heat generated during the formation of planets themselves would probably destroy the organic molecules, the compounds could be available for delivery by other bodies that accreted more gently, Ciesla suggests.

’The key thing is that if our understanding of the solar nebula is correct, we would expect this formation of organics to be a natural outcome - not only in our solar system but all planetary systems throughout the galaxy,’ Ciesla says.

Iain Gilmour, who researches cosmochemistry at the Open University in the UK, is impressed by the study.  ’This is highly significant since it means that the organic chemistry needed to make the precursor molecules for life would be part of the normal processes of planet formation and we are discovering planets around other stars at an ever increasing rate,’ he says. ’And if life is ever to have existed on any of these then having the precursor molecules available in abundance would be a distinct advantage.’ Gilmour adds: ’ I guess what we still don’t know is just how much complex organic material might have been produced and how much of it would have ended up in places - comets, asteroids, planets - where it might have led to life originating.’