For the first time, chemists have isolated selenium-containing quinones and found them to have strong anticancer activity. The new compounds have great potential for future cancer therapy, and early studies show similar activity to the well-known chemotherapy drug cisplatin, although a selenium-based therapy would cost a fraction of the price.

’Selenium or sulfur-containing quinones are not found in nature because they are too unstable,’ explains Hani Amouri, who led the research at Pierre and Marie Curie University in Paris, France. ’We were able to make them for the first time by stabilising them as metal complexes with iridium.’

Quinones are aromatic compounds that are found widely in nature and usually contain two carbonyl groups (C=O) that contribute to the aromaticity of a ring system. To swap the oxygen atoms for selenium, Amouri’s team started with the synthesis of a precursor complex, where an iridium ion is sandwiched between a chloride-containing arene and cyclopentadiene. Sodium selenide (Na2Se) was then added to substitute for the chlorine atoms - forming a stabilised quinone complex with selenium atoms in place of oxygen. 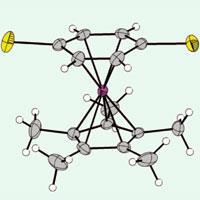 The first stable selenium-containing quinones have been isolated

The team then drew on the expertise of Paul Dyson at the Federal Polytechnic School of Lausanne in Switzerland, who examined the biological activity of the new compounds. ’Selenium is well known to have interesting biological properties, so we were keen to find out whether these compounds could promote any interesting activity,’ says Amouri.

Dyson measured the anticancer activity of the selenium quinones and found similar potency to the platinum-based cisplatin. However, the mechanism of action is unlikely to be the same, Amouri notes, due to the completely different structure.

Although selenium-based cancer therapy is still far away, the team is confident that even more effective compounds could be designed by optimising the structure. In addition, a similar approach could be applied to create other novel selenium-based compounds that would usually be unstable.

’This example of a metal coordination compound displaying high cytostatic activity illustrates the importance of metal compounds in anticancer chemistry,’ says Jan Reedijk, who has designed anticancer compounds at the University of Leiden in the Netherlands. ’Most surprising is that similar compounds with structurally related ligands are not very active, so the activity must be linked to the selenium atoms.’