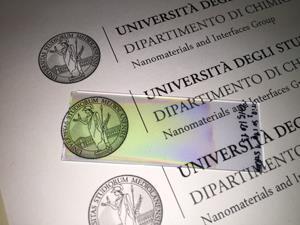 The final device is transparent

Scientists in Italy have engineered a cheap and simple electrochemical sensor that cleans itself when exposed to ultraviolet light. Their system offers a route towards self-cleaning electrodes with myriad environmental and biomedical sensing applications – from detecting pollutants in water to monitoring medications in blood.

Open any book on chemical or biological sensors and you’ll find a lot of content on electrochemical devices. This prevalence is testament to the importance and advantages of electrode-based sensing; and electrodes containing nanomaterials are becoming increasingly popular, owing to their high surface-to-volume ratio, which can improve their sensitivity and lower costs.

However, nanomaterial-based electrodes are very difficult to keep clean, hindering their application in environmental and biomedical sensing. River water, for example, contains species that can foul electrochemical sensors and prevent their reuse. In another example, dopamine – an important neurotransmitter, particularly in Parkinson’s disease – fouls sensors during its electroanalytical detection, preventing reusability.

To solve the fouling problem, Luigi Falciola and his team at the University of Milan have engineered an electrochemical sensor with a photoactive top layer of titania that can be directly cleaned with ultraviolet light and repeatedly reused to detect dopamine. The titania covers a highly ordered distribution of silver nanoparticles (the actual sensing tool), arrayed on a bottom layer of silica.

Self-cleaning surfaces based on titania are an increasingly common part of our everyday lives, from self-cleaning windows, cars and cements to self-sterilising medical devices. These applications all clean using the same basic chemistry: ultraviolet light – from sunlight or an artificial source – induces photocatalysis at a titania coating, which breaks down organic foulants. Falciola’s team have incorporated the same principle in their sensor.

‘There are a few previous examples of self-cleaning electrodes, but our device is simpler and also probably cheaper to make,’ explains Falciola.

In an important first, Falciola’s team also showed that their titania top layer can not only clean but also protect nanoparticle-modified electrodes, preventing oxidation and degradation of the silver sensing layer. ‘The device is not affected by aging’, adds Falciola, ‘it just needs ultraviolet light [to clean it]. This was a really unexpected result; we are very happy with the ruggedness of our sensor.’

Electrochemist Christopher Brett, from the University of Coimbra, Portugal, recognises that the work is promising and deserves to be pursued. He points out that the nanoparticle layer may need to be tailored for specific analytes and ‘the cleaning time [currently 1 hour in the case of dopamine] will also have to be reduced before widespread use can be envisaged for routine analysis, especially outside the laboratory.’ Falciola confirms that ‘there’s plenty more work to be done’. Among several aspects, the team is investigating the cleaning time, as well as the device’s detection limits.

The self-cleaning titania cover may, in principle, be used on any electrode surface. ‘So, the list of analytes could be endless’, Falciola concludes. ‘Our goal is to use these types of devices in field applications.’ To realise this, the team hopes to collaborate with sensor-producing companies to build a commercial prototype.