A glucose- and oxygen-fuelled biosensor that also acts as a drug delivery system is the first to diagnose, treat and assess if cancer treatment is working.

Monitoring the effects of anticancer drugs and tailoring drug delivery in real-time can lead to increased treatment success for patients, and combining these components for an all-in-one therapy platform has attracted major research efforts. Being able to realise the potential of ‘miniaturised electrodes and getting clear biological information was the major challenge that needed to be solved,’ explains Jun-Jie Zhu of Nanjing University, whose team has developed a system that diagnoses cancer cells, releases an anticancer drug and then measure the drug’s effect. 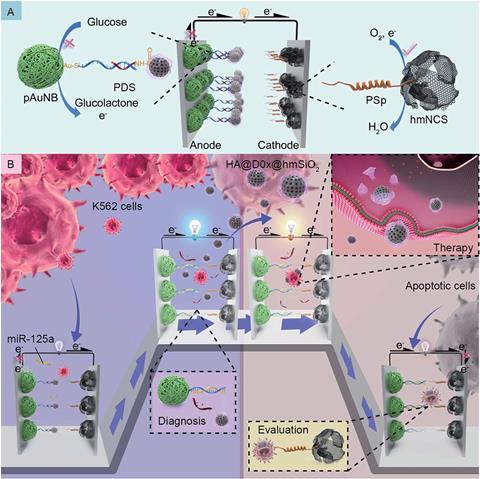 The system combines diagnosis, therapy and evaluation in one system

Glucose and oxygen – both of which are readily available in the body – power the system. It has an anode to catalyse glucose oxidation, producing electrons, and a cathode that catalyses oxygen reduction to accept these electrons. Testing confirmed that bowl-shaped gold nanoparticles with small pores on the surface as the anode, and a cathode of ultra-thin carbon layers arranged in a hollow, spherical shape were the best materials to create electron flow through the system.

DNA links the anode to the anticancer drug doxorubicin. This link partially blocks electron flow in the system. However, exposure to a cancer biomarker outcompeted the DNA linker, releasing the anticancer agent from the anode. The scientists used a power increase as a signal that the system has detected a cancer cell and released the drug.

Cancer cells take up the doxorubicin, which kills them. When cell death happens, proteins that are normally within the cancer cells become exposed to the extracellular environment and are gathered up by the cathode. These proteins block electron transfer so the amount of power the system has decreases again. This decrease in power signals that the cancer treatment is working.

‘[It] fits very well with the current emphasis on precision medicine that is pervading the medical area. The main thrust of precision medicine is indeed the concept of targeting medical therapy with biomarker diagnosis,’ says Michael Thompson a bioanalytical chemistry expert, at the University of Toronto in Canada.

Monitoring cell death in real-time by measuring a system’s power is something that traditional cancer therapies lack. However, as cell death can take some time to happen, the durability of Zhu’s biosensor comes into question.

‘It remains to be seen if the strategy presented in this study can be realised as a general approach. The reason for a level of scepticism is that it is not entirely clear that the sensing protocol will be able to deal with the ubiquitous fouling problem on electrochemical systems by components of biological fluids,’ adds Thompson.