Inexpensive, sensitive technique for detecting distribution of mRNA transcripts in cells or tissue

A new technique, with sensitivity unmatched by current technologies, can detect changes in gene transcription that occur during the course of a disease, report US researchers. The ability of the method to track changes in rare messenger RNA molecules (mRNAs) could ultimately make it indispensable as a diagnostic tool.

Changes in the expression of mRNAs often accompany the progression of a tissue from a healthy to a diseased state. Several technologies exist to evaluate these changes including microarrays and serial analysis of gene expression (Sage). But these methods are limited by their inability to detect low abundance RNAs. 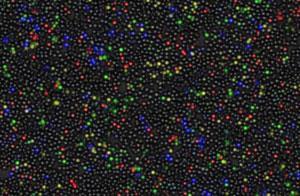 Polonyis a contraction of ’polymerase colony’, a small colony of DNA. Polonies are clonal amplifications of a single DNA molecule, grown on a solid-phase surface.

Pmage is a technique that takes the best of Sage and high throughput DNA sequencing to obtain a global distribution of mRNA in any cell or tissue for a cost of about $1500 (?757) compared to about $10 000 for a Sage analysis, explained Seidman.

’Now we have a method that gives a very clear frequency distribution of mRNA molecules in a cell,’ he said.

The first step in the process involves the creation of Pmage tag libraries. Total RNA is converted to double-stranded complementary DNA molecules, which are cleaved to form tags. These are bound to ferromagnetic beads in an oil emulsion - each oil droplet within the emulsion serves as a tiny polymerase chain reaction (PCR) chamber. A bead with an attached DNA tag, or template, is added to each droplet in a PCR tube and PCR is used to produce millions of copies of that template, all attached to one bead. The DNA-coated beads are cross-linked to glass cover slips in a monolayer that provides a gel-less platform for sequencing and a single focal plane for microscopic imaging.

’This method shares many of the advantages of Sage over hybridisation-based approaches [such as DNA chips] but is a significant improvement over Sage,’ said Kenneth Kinzler, professor of oncology and director of the Ludwig Center at Johns Hopkins University in Baltimore, MD. ’This may become the gold standard for gene expression analyses,’ he said.

To test the robustness of Pmage, the researchers evaluated the transcriptional profiles of mouse heart tissue. Seidman’s team constructed two libraries: one from wild-type mice and one from mice carrying a genetic mutation that ultimately causes a cardiac pathology that mimics the development of hypertrophy (thickening of the heart muscle) in humans. In order to identify the early transcriptional changes involved in triggering this condition, this second library was constructed from prehypertrophic mice. From the heart tissue of these mice, the researchers report that Pmage identified 1486 unique tags corresponding to 706 genes with significantly altered expression in the prehypertrophic tissue. On the other hand, only 53 genes with significantly upregulated or downregulated expression were detected by Sage. In addition, 99 per cent of the unique tags identified in the wild-type library were expressed at levels below 60 copies per cell.

’The major take home message is that a lot of changes are taking place early in disease,’ said Seidman. His team is continuing to use Pmage to evaluate gene expression changes in other animal models of disease. In time, he sees the technique being used as a diagnostic tool.