Sensors in the blood

Scientists from China have developed a water-soluble zinc-based fluorescent sensor to detect pyrophosphate in blood that isn’t affected by the environment and can be used in real blood samples. 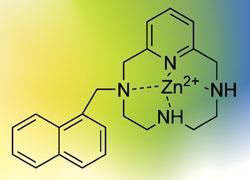 Zhilin Wang from Nanjing University and colleagues made the sensor by binding zinc to a water-soluble naphthalene functionalised tetraazamacrocycle, a molecule containing a ring of seven or more atoms,  four of which are nitrogen atoms. They measured the fluorescence response at this stage then tested the compound in a buffer solution with pyrophosphate mixed with other anions. They found that the zinc bound only to the pyrophosphate and a second fluorescence response was measured. The ratio of the measurements was taken to indicate the amount of pyrophosphate present - a process called ratiometric fluorescence.

The team tested the sensor in blood serum and found that it performed as well as it had in the buffer. ’There is a lack of pyrophosphate fluorescent ratiometric sensors in both aqueous solution and real physiological media,’ says Wang. ’Our sensor can be applied to detect variations of pyrophosphate concentrations in real blood samples.’

’Unique and selective excimer [a molecule formed by two atoms or molecules that exists only in an excited state] formation in the presence of pyrophosphate can induce nice ratiometric changes,’ says Juyoung Yoon, an expert in fluorescent chemosensors from Ewha Womans University in Korea, ’the probe was successfully applied to pyrophosphate determination in blood serum and to monitor enzyme activity.’

In the future, Wang hopes to test the sensor in vivo, in particular for toxicity. ’Our fluorescent sensors can be excited by visible light, which is preferable,’ he says, ’as they reduce damage to cells and organs.’ Wang goes on to say that sensors that emit various visible colours with different pyrophosphate concentrations will be of value for applications such as paper based sensors. However, he adds that to obtain these sensors, this field needs further study.