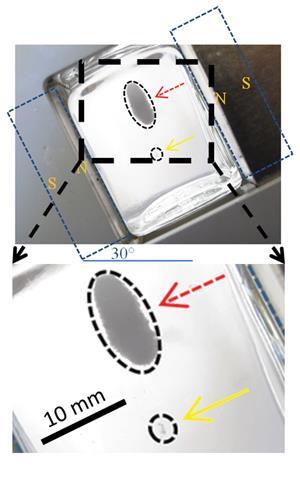 A team in the US has shown that enantiopure and racemic crystals can be separated by magnetic levitation.

The isolation of pure enantiomers is of particular importance in the pharmaceutical industry, where one enantiomer is typically responsible for the therapeutic effects of a drug, while the other may be inactive or even toxic. One alternative to the often used solution-based separation techniques such as high-performance liquid chromatography (HPLC) is to purify the desired enantiomer from a mixture of crystals of enantiomerically pure and racemic compound.

As enantiopure and racemic crystals generally have different densities due to distinct packing arrangements of the molecules, they can be levitated in a paramagnetic solution to different heights by the balance of magnetic and gravitational forces and then separated.

Using four sequential magnetic levitation (MagLev) separations, a team led by Allan Myerson at the Massachusetts Institute of Technology purified a 1:1 mixture of S- and RS-ibuprofen to 99.2% ee.

‘Chiral resolution, especially during drug discovery, requires tedious method development by an experienced scientist to achieve efficient separation,’ says Syed Rizvi, a chiral separations and pharmaceutical analysis expert at Nova Southeastern University in the US. ‘The MagLev technique however is quite simple, inexpensive and has great potential to become a routine method for chiral separation.’

Despite its simplicity, the use of MagLev on a large scale presents a number of challenges. ‘As it requires that the racemic crystal forms reliably, does not stick to enantiomerically pure crystals, and has a different density, it is more likely to be used in an analytical laboratory setting engaged in preclinical studies of a compound,’ says Myerson. The need for an equilibration time for the drug crystals to settle as well as the choice of paramagnetic medium also need to be considered.

The team are currently working to apply MagLev to the purification of other chiral compounds, and hope to extend their technique to the separation of cocrystals.