A US scientist has suggested that pregnant women should avoid using shampoos and other cosmetics containing the chemical diethanolamine (DEA), after finding that it inhibited brain development in mouse foetuses. But the research, reported by news outlets around the world, has been slammed by a leading toxicologist. 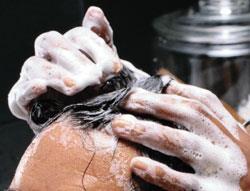 Tony Dayan, a toxicology consultant and advisor to the UK government, told Chemistry World that he had ’very serious questions’ about the validity of the study’s conclusions.

Steven Zeisel of the University of North Carolina at Chapel Hill, US, who led the research team, stressed that pregnant women should not be panicked by his results. ’But it would probably be prudent to look at labels and try to limit exposure until we know more,’ he said.

The team found that when an ethanol solution of DEA was dropped onto to the skin of pregnant mice, their foetuses showed inhibited cell growth and increased cell death in parts of the brain responsible for memory.

But Dayan, formerly head of St Bartholomew’s hospital toxicology unit, London, UK, points out that toxic effects in the mother mouse, rather than the foetus itself, could have been responsible for any choline abnormalities.  The study also fails to assess how neural damage may be linked to the reduced sizes of the mouse litters seen by the researchers, he said.

In assessing the predicted risk to humans, the authors ’have ignored all the mechanistic and permeability barriers, in the skin and the placenta, for absorption,’ he added. The human body has a ’large number of powerful mechanisms which will destroy DEA. It is highly unlikely that any DEA would reach the brain of a developing foetus,’ he said.

Dayan is also sceptical about Zeisel’s extrapolation of his mouse dosing data to estimate potential human exposures to the chemical.

The controversial study is reported in the August issue of the Federation of American Societies for Experimental Biology Journal1.

Zeisel’s research paper also claims that DEA, a surfactant that helps to stabilise foams, ’is present in many consumer products such as shampoo.’

But according to Chris Flower, director general of the Cosmetic, Toiletry and Perfumery Association, a UK trade organisation, DEA is already prohibited from use in cosmetic and toiletry products in Europe because of its suspected ability to form cancer-causing nitrosamines.

It is permitted at strictly controlled levels when associated with other compounds, most commonly as a fatty acid DEA such as ’coconut DEA’, a formulation that prevents nitrosamine formation.

Although DEA is not banned in the US, only a handful of products containing it are available. This is because many companies now use a global formulation that can be sold under the prevailing regulations of any target market, Flower explained.