Two teams of researchers in the US and Europe have shown that light can play a bigger role than expected in the nascent field of ultracold atom-ion interactions. In one experiment, the reaction rate between a closed-shell atom and a radical ion was 10,000 times faster than between two radicals, and, in another, electronically exciting the ion increased the reaction rate more than 100-fold. These counterintuitive results give an insight into the ultracold chemistry taking place in the cold, dilute gas between the stars.

At room temperature, charge transfer reactions between a neutral atom and an ion almost always involve the electron jumping from the atom to the ion. To form a molecular ion, the two particles need to lose energy - either by running into a third party or emitting a photon. If the latter occurs, emission of a high-energy photon binds the atom and ion to one another, forming a radiatively stabilised molecular ion. At room temperature, the reaction happens too quickly for the photon to be emitted, so radiative reaction pathways are suppressed.

A team led by Eric Hudson of the University of California, Los Angeles, investigated these reactions at ultracold temperatures by reacting calcium atoms with ytterbium ions. The team used a trap to hold the ions and neutral atoms while they were cooled to a few thousandths of a degree above absolute zero. The team measured a suspiciously fast reaction rate between the overlapping clouds: 2 x 10-10 cm3/s. But collaborating theorists calculated that their measurement was correct.1 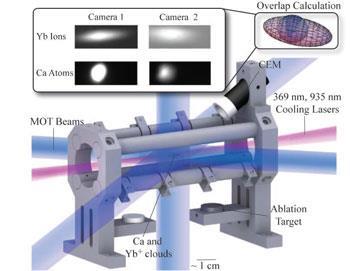 Meanwhile, a European team, led by Stefan Willitsch of the University of Basel, Switzerland, showed that light can also catalyse the ultracold reaction between a calcium ion and a rubidium atom. If the calcium ion is excited when it meets the rubidium atom, it can emit a photon in many more ways than if it was in its ground state - and this means that the pair is more likely to react. Starting the reaction with the calcium ion in its second excited state, the group found that the reaction rate was more than 100 times higher than if it was in its ground state.2

As Hudson explains, both these studies demonstrate that the electrons on a slower, cold atom have time to react to an ion during a collision. The normal charge transfer reaction, where the electron jumps from the atom to the ion, becomes very unlikely. Instead, the slow-moving atom and ion spend more time close to each other and resemble an excited state molecule, which has a high probability of emitting a photon - and this can give reaction rates a significant boost.

To model the activity and history of gas clouds, astrophysicists draw on databases of reaction information, but the data is incomplete, with many reactions approximated. The surprising results from both groups emphasise the need for thorough quantum calculations and experimental measures of the reaction rates, says Hudson. ’It’s not that the reaction rates change by factors of two, it’s that they could change by factors of 10,000.’

In addition to investigating fundamental aspects of ultracold chemistry, these new studies can help astronomers understand reactions in the gas clouds between stars. Carlo Sias, an ultracold researcher at the University of Cambridge, UK, says that in space ’collisions between ions and neutral atoms happens at a much higher rate compared to atom-atom collisions’ because of their longer-range interactions.