Short peptides self-assemble into a catalyst

The short peptide chains are made of seven amino acid residues

Researchers in the US have created catalysts from peptide chains that are only seven amino acids long. Usually, protein catalysts – enzymes – consist of much longer chains of amino acids, often several hundred, so that they can fold into a unique three-dimensional conformation that underlies their activity. The finding could shed light on the evolution of modern enzymes, and opens the way for the possible development of a new class of synthetic peptide-based catalysts.

The peptides self-assemble into fibrils that resemble amyloid protein aggregates that are present in neurological diseases such as Alzheimer’s. The new finding hints that these amyloid structures could have more a complex biochemistry than previously realised.

A team led by William DeGrado at the University of California, San Francisco and Ivan Korendovych at Syracuse University constructed seven-residue peptides with alternating hydrophobic amino acid residues that self-assemble into sheet-like structures and aggregate into fibrils. In the presence of zinc ions, the fibrils were able to catalyse the hydrolysis of a model ester, p-nitrophenyl acetate. 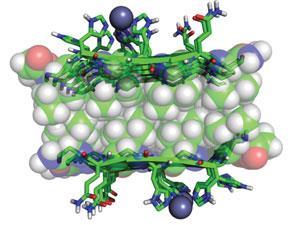 The chains fold into fibrils that act as catalysts

‘The formation of fibrils seems to be very important for the catalytic activity,’ says Korendovych. ‘Our findings would support a potential link between the formation of amyloid assemblies from relatively simple peptide chains and the emergence of protein catalysts during the evolution of enzymes.’ Furthermore, he adds, it should be straightforward to set up a high-throughput screening system for hundreds of peptide sequences to test for catalytic activity. ‘This could be a discovery vehicle for catalytic activity. One or two hundred peptides give you an enormous number of possibilities for screening.’

Because the fibril structures are reminiscent of the amyloid plaques that are present in certain human brain diseases, it is conceivable that naturally occurring fibrils have a more complex chemistry than previously thought, says Korendovych. ‘It might be worth investigating if catalytic activity might contribute amyloid toxicity,’ he suggests.

Louise Serpell, who researches amyloid fibrils at the University of Sussex in the UK, describes the study as ‘really impressive’.

‘Enzymes have evolved to be very large so that they can accommodate an active site, and there have been many attempts in the past to make minimal protein structures with catalytic active sites, but they pretty much don’t work,’ she says. ‘What this new study shows is that it is possible to make a catalytic protein structure out of much smaller amyloid type peptides, which is really amazing.’

Serpell adds that while the possibility that amyloid fibrils involved in human in human diseases such as Alzheimer’s may display catalytic activity is intriguing, the current study does not provide sufficient evidence that this is the case. ‘But it may be something that is worth investigating further,’ she says.