Chinese chemists have come up with a versatile new microgel which is simple to make. The gel combines three abilities. Not only can it be used for magnetic imaging and to create luminescent biological labels, but it also has the potential to transport drug molecules around the body. With further research, it is hoped that the new gel could have many other applications - such as housing catalyst molecules or acting as a micro-scale reaction platform.

Microgels are essentially hydrogels made from large polymer building blocks - in this case poly(allylamine hydrochloride) and dextran, a polysaccharide. The gels can absorb large quantities of water, and can swell or shrink in response to changes in their environment, such as temperature, light or pH. Importantly, the large pores in the microgel can accommodate a variety of molecules, from nanoparticles to drugs. 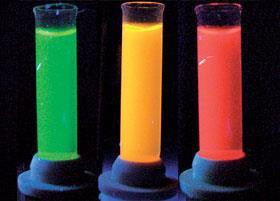 Developed by Sun Junqi at Jilin University, Changchun, China, the new gels contain magnetic nanoparticles of magnetite (Fe3O4). This allows them to be detected on MRI scans and could also enable magnetic fields to be used to trigger the release of treatments directly to areas of disease.

Sun’s team has also demonstrated the potential of the large pores by including luminescent particles of cadmium telluride (CdTe) in the structure. ’By incorporating differently sized CdTe nanoparticles in our microgels, they can be used as biological labels and detected separately using fluorescence imaging techniques,’ says Sun.

’The synthesis was conducted at room temperature, and the materials used are biocompatible and easily available,’ Sun adds, noting that yields for the process were commonly higher than 93 per cent.

’Other groups have prepared similar materials, but the clear difference in this work is the easier fabrication,’ says Andrew Lyon, an expert on microgel design at the Georgia Institute of Technology, US.

However, ’the grander challenges in bioimaging and drug delivery are still ahead,’ Lyon adds. There are problems using hydrogels to deliver drugs as they are prone to leaks. In addition, CdTe is toxic, so safer fluorescence emitters are needed.

However, Lyon thinks that the Chinese work could be very useful in other fields, because nanomaterial researchers are always looking for cheap and effective ways to make novel materials on a larger scale.