A class of molecules that look like open scallop shells has been made by French researchers.1 This is the first time these curious compounds, whose chirality comes from hindered rotation around two bonds, have been synthesised in a single straightforward reaction.

Most chiral chemicals are handed because they have four different groups bound to one carbon atom. However, there are other, stranger forms of chirality, such as atropisomerism. Here, steric strain hinders or stops rotation around a bond, creating a chiral axis and two mirror image molecules. This often happens in all-ortho substituted benzenes, in which the bond between the rings is the chiral axis. 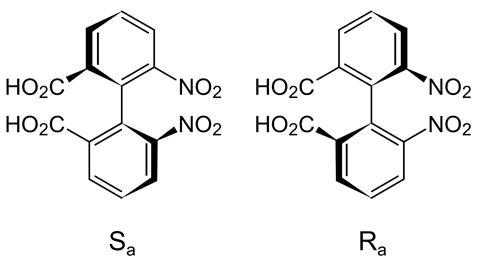 ‘I think the fascination in forms of chirality, other than centric or point chirality, is because they indeed exist in nature,’ says Richard Hsung, an organic chemist at the University of Wisconsin–Madison, US, who wasn’t involved in the work. The last resort antibiotic vancomycin has a chiral axis as well as the cotton plant pigment gossypol. Some chiral compounds have become a staple in asymmetric reactions, such as the phosphine ligand BINAP.

However, the steric hindrance that creates atropisomers’ handedness is also what makes them tough to synthesise. Reactions need to overcome strong steric interactions. A team led by Joanna Wencel-Delord and Françoise Colobert from the University of Strasbourg has now created molecules with two chiral axes in a single step – ‘a rare feat’, says Hsung.

Wencel-Delord, Colobert and their group started off with a chiral sulfoxide biaryl. Its sulfur-centred chirality is what creates the two chiral axes. A single palladium-catalysed reaction that uses only commercial compounds opens up a whole class of double atropisomers. Their clamshell-like geometry could work like the active site of an enzyme, forming a chiral pocket that helps make other chiral molecules. 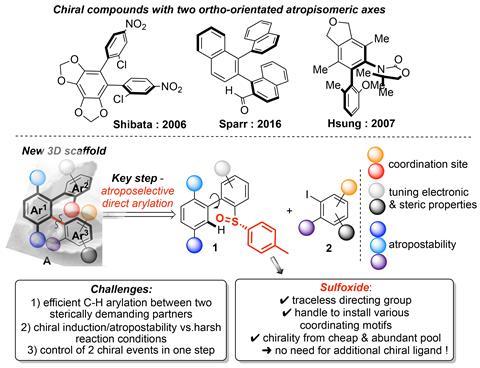 Concept of terphenyl scaffolds as precursor for original chiral ligands

‘The spatial arrangement of atropisomers is precisely defined,’ says Christof Sparr from the University of Basel, Switzerland, who is behind one of the few previous syntheses of molecules with two axes.2 This makes axially chiral compounds attractive not only for catalysis but also for materials science.

In a proof of concept, the French researchers converted one of their compounds into a phosphine ligand they dubbed BiaxPhos and found that it worked perfectly in an asymmetric hydrogenation. ‘This new type of two-axes molecules would flourish in the field of asymmetric reaction as well as – potentially – molecular machines,’ agrees Junichiro Yamaguchi, a synthetic chemist at Waseda University, Japan, who specialised in cross-coupling reactions.

‘One future direction would be to gain access to both diastereoisomers,’ Sparr says. As the molecule has two elements of chirality, it can form four stereoisomers – two sets of mirror images. However, the French team’s synthesis could only make two of them. ‘If we achieve good selectivities, we can control the topology of structurally unique scaffolds.’