Single atom catalysts double up to link oxidation and reduction

Chinese chemists have hatched yolk-shell nanostructures that they say are the first to integrate different metals as single atom catalysts to achieve a tandem synthesis. ‘Our design concept is an important step to simulating enzyme catalysis or activation of inert chemical bonds,’ says Yuen Wu from the University of Science and Technology of China in Hefei.

In the nanostructure’s inner yolk layer, Wu and colleagues embed single palladium atoms on a metal organic framework (MOF). In its outer layer, they embed iron in a nitrogen-doped carbon shell. Under electrolysis, the catalysts couple alkenes and nitroaromatic compounds, after iron atoms and oxygen epoxidise the former and palladium atoms and hydrogen reduce the latter. They have developed eight catalysts, the main one having an equal ratio of iron to palladium.

Wu’s team was inspired by photosynthesis and other biological systems where enzymes often simultaneously perform oxidation and reduction reactions at different sites. To simulate this, the researchers wanted to use single atom catalysts, where tiny amounts of often expensive metals enable reactions surprisingly well. Using ‘seemingly incompatible oxidation and reduction reactions in one system’ seemed ‘a great challenge’, Wu adds. The idea of the yolk-shell design emerged initially because Wu’s PhD student Yafei Zhao was looking for a safer way to do reactions with both oxygen and hydrogen gas. 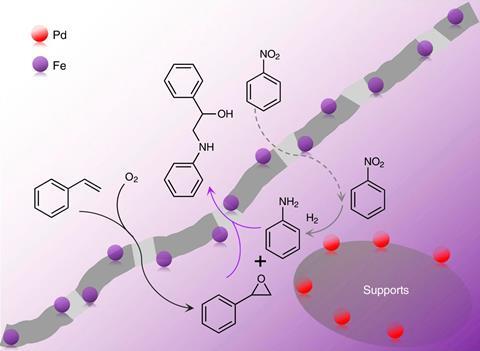 Together, the chemists first encapsulated palladium chloride in a MOF, then coated the MOF with silica. They coated the silica with a polymer containing iron–titanium complexes, and pyrolysed the nanosystem at 700˚C to break the metals down to single atoms. Finally, they etched away the silica coating with base to give the yolk-shell structure.

Wu’s team put the catalysts into an electrolytic system that generated hydrogen and oxygen by splitting water, which reduced nitrobenzene and epoxidised styrene. They made the 1-phenyl-2-(phenylamino)ethanol product with 83% chemoselectivity and 91% yield. The researchers also showed the catalyst worked with various nitrobenzenes and cyclohexenes. ‘If we can further improve the catalytic selectivity through synthesis conditions or equipment, its industrialisation prospects are very bright,’ says Wu.

Abhaya Datye at the University of New Mexico, US, is impressed that Wu’s team managed to place single atoms of palladium and iron in close proximity in a porous structure. It ‘allows remarkable selectivity for a tandem reaction’, Datye says. ‘Broader application of this concept, and simpler synthetic protocols, may help in achieving widespread impact of this finding,’ he adds.