Skills in industry: change needed from within

Leading industrialists call for companies to invest in training and development

Employers in the chemical industry must act now to ensure the next generation of scientists has the necessary skills, according to industry leaders.

Speaking at a recent skills summit, Tom Crotty, Chief Executive of INEOS Olefins and Polymers, issued a call to arms for industrialists, urging them to take an ’active lead’ in managing the skills agenda. Crotty’s views are echoed by Paul Booth, President of SABIC UK Petrochemicals: ’Industry needs to step up and I think that’s fair, because ultimately its industry that will benefit.’

There is no great mystery surrounding the science skills shortage in the UK - it is the product of an ageing workforce and dwindling applications for science, technology, engineering and maths (STEM) courses. But what is being done to plug the gap? 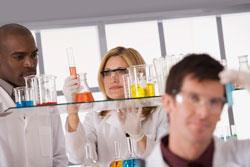 Scientific skills are at risk of being lost

As covered in Chemistry World last year, Semta, the Sector skills council for science, engineering and manufacturing, launched an action plan to address the skills requirements of the bioscience, biotechnology and pharmaceutical industries. Now, the BBSRC has announced a major new consultation to identify skills at risk of being lost from the UK life sciences community.

Simon Marsh, Employment and Communications Director at the Chemical Industries Association, agrees with Crotty and Booth that change must be industry led. He remains unconvinced, however, by the continual creation of new skills initiatives. ’We welcome any support, but at the moment the focus of the chemical and pharmaceutical sector is on our Skills Academy [the National Skills Academy Process Industries] and on helping that deliver for companies.’

Ian Mains, Business Development Manager at the Skills Academy, points out that its skills strategy is driven by key industrialists in each region. He admits there are currently massive shortfalls, but says science education programmes provide seeds of hope. ’It’s not all doom and gloom. There are some marvellous programmes going on to change perceptions of STEM, so a new army of young people is being nurtured.’

One concern, of course, is the current economic slump, which has taken focus away from training and development. ’Companies are more concerned about survival than whether they will be short of graduate engineers in five years time,’ says Booth. ’The fact is that training and development budgets have always been seen as discretionary and are one of the first casualties if you are in significant losses.’

Marsh notes that companies downsizing due to the recession could solve some of the skills problems. Apprentices may suffer, however. ’I’m worried the downturn might hit apprentices particularly hard,’ says Marsh. ’We’ve asked the government for some short term support for them.’