US researchers mapping the volatile chemicals emitted from skin cancers have found that the levels of just two compounds could differentiate diseased from healthy tissue. Identifying skin cancer’s unique odour profile could eventually allow doctors to diagnose cancer quickly and easily by waving a handheld ’electronic nose’ over a suspect area, they say.

’A test that could be used in a doctor’s surgery is still a few years away but with emerging nanosensor technology, it should be possible. But just being able to identify these two compounds is a huge step forward,’ says Michelle Gallagher, a senior scientist at Rohm and Haas in Philadelphia, who carried out the work with lead researcher George Preti of the Monell Chemical Senses Center in Philadelphia, and coworkers.

Gallagher, who presented the work at the American Chemical Society’s Fall meeting in Philadelphia, says their research was inspired by work which has shown that dogs can be trained to identify skin cancers by sniffing exposed skin, and lung cancers by sniffing breath samples.

The team have recently published a profile of the compounds emitted from healthy skin [1]. For the new study, they used two different methods to capture their samples:   an absorbent wick dangling in a glass funnel cupped over the skin picked up low molecular weight volatiles, while the team extracted higher molecular weight compounds directly from the skin by dissolving them in an alcohol mixture. 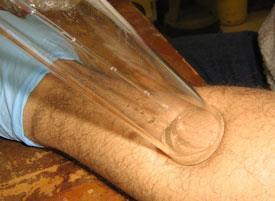 When the researchers compared the odour profiles from the skin of 11 healthy subjects to 11 with skin cancer using gas chromatography/mass spectrometry (GC-MS), they found that the levels of dimethylsulfone in the air above skin cancers were significantly higher than normal, while 6-methyl-5-hepten-2-one concentrations were lower. Other volatile compounds may also change concentration between diseased and normal tissue, but the two the researchers picked out seemed sufficient to identify the cancers reliably.

Why the levels of these chemicals change in patients with skin cancer is still a mystery, however. ’We don’t know the metabolic origin of these changes,’ Gallagher says.

Ted Gansler, of the American Cancer Society, says larger studies will be needed to check how reliably the test can distinguish between cancerous and normal skin - and even more importantly, to distinguish between skin cancer and a variety of benign growths and rashes that might be confused with cancer.

So far, the team have only looked at basal cell carcinoma - the most common skin cancer. They next plan to extend the work to look at all three types of the disease, including squamous cell cancer and melanoma - the deadliest form.