A patient is rushed into hospital. Doctors crack the patient’s chest to operate. A life is saved, but what comes next? In order to access the heart and lungs, the sternum had to be opened, but closing it again and healing the wound is often more problematic than the surgery itself.

Researchers in Ireland and Germany have developed an adhesive to address this issue. Standard practise for sternal closure winds steel wires around the bones to immobilise them as they heal. However, displacement can occur in active patients and older bones can be weak, resulting in the wires cutting through. If the bones part again, a patient can be in agony.

Surgeons have long sought better means of closing ribcages. In fact, lead researcher Wenxin Wang of University College Dublin says the recent research came about when they were approached by Mark Da Costa, a surgeon, who had been in contact with companies developing another adhesive for this purpose. However, while it could adhere to bone, it was too strong so the bone had to be re-sawn delaying access, which could prove lethal.

A benefit of wires is that they allow fairly rapid access in the event of post-operative complications, which are common in the first 24 hours. As such, Da Costa asked Wang’s team if an adhesive could be created that would be strong, but also allow reopening in the short term. 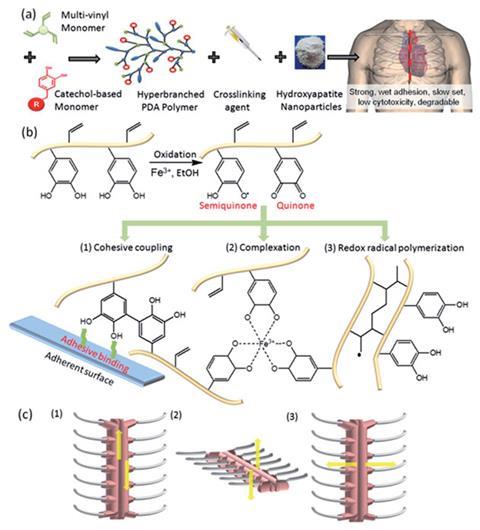 Inspired by the biodegradable catechol-based adhesive proteins in mussels, Wang’s team incorporated catechol monomers into a non-toxic polydopamine-co-acrylate polymer to deliver a composite specifically tailored for this purpose. The composite demonstrated excellent adhesive and mechanical properties even in wet conditions: it set slowly over a week, had enough strength within the first 24 hours to prevent displacement, but was weak enough to facilitate re-entry to the chest within this time. A carefully optimised curing agent mixture generates the balance of cross-links required for such diverse properties and the polymer is also reinforced with hydroxyapatite particles for extra strength

David Farrar, a biomaterials expert at the Smith & Nephew research centre, UK, says that these early results look promising. The next challenges, he adds, will be tests with real bone to check it allows for normal healing and that degradation can be “in tune” with the healing rate so that the overall strength of the repair is never significantly compromised.

Farrar says that ‘much remains to be done before testing in patients. Also, adhesives in sternal closure have not yet been widely accepted by surgeons.’ Nevertheless, if the technology can be proven, then it could be useful in other orthopaedic applications such as fracture repair.

Wang is excited about the future of this material, which can potentially reduce healing time from several months to weeks and is aiming to create a spin-out company surrounding this promising new technology.