The results of a human cancer therapy trial show for the first time that tumours can be targeted and infected by engineered viruses, without damage to surrounding tissues. The approach, which uses the virus used in smallpox vaccinations, provides a means to deliver a wide variety of different anti-cancer molecules to tumours.

The idea that viruses can be used to kill cancer cells is not new. However, it is difficult to reach tumours deep within the body that cannot be directly injected and a more systemic approach could put healthy tissue at risk. The team, led by David Kirn at Jennerex in California and John Bell at the University of Ottawa,Canada, used a neat tumour-targeting trick to ensure that their poxvirus was only active in tumours and could not attack healthy cells.

Kirn explains the poxvirus his team used is essentially the same virus - vaccinia - used to vaccinate children worldwide against smallpox. ’It’s been used in hundreds of millions of healthy children around the world,’ he says. ’So the safety profile and our understanding of this is very, very deep.’ 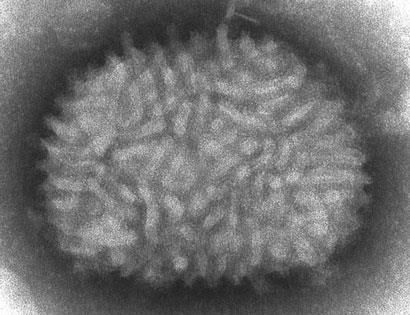 It is useful for targeting tumours because its replication depends on proteins that are active in almost all cancer cells - specific signalling proteins called Ras proteins. It also needs thymidine kinase (TK), an enzyme found in abundance in tumour tissue. Although vaccinia can make its own TK, Kirn’s team deleted the gene encoding the enzyme in the virus, meaning it would need to prey on cancer cells to survive.

In the trial, 23 cancer patients were given different doses of the virus. The researchers examined biopsies of tumour tissue pre- and post-treatment, testing for virus DNA and staining for specific virus proteins. They only detected the virus in post-treatment biopsies from patients who had been given the higher doses. Weak staining in nearby healthy tissue showed the virus had been taken up but could not replicate.

Donna Senger, an oncologist at the University of Calgary, Canada, says vaccinia is a good choice because of its stability in the bloodstream. ’This allows it to circulate within the patient’s blood where it can reach both macroscopic and microscopic metastatic cancer cells,’ she says. According to Senger, the work overcomes a ’long-standing hurdle’ for anti-cancer viruses - delivery to distant metastatic tumour sites.

The team observed some killing of cancer cells, probably due to a combination of the natural activity of the virus and an immune stimulating factor the researchers encoded in its genome. But Kirn says in theory any anti-cancer molecules, including antibodies and small interfering RNAs, could be delivered by the virus. ’It’s a very broad platform,’ he says. ’Just about any protein that you would want to use against cancer could be engineered into this virus - the sky’s the limit.’