In the future, we may not need air conditioning units or central heating - our windows could keep us cool or cosy instead

Vanadium dioxide (VO2) has long been recognised as a potential candidate material for making ’smart windows’ because it can change from a transparent semiconductive state at low temperatures, allowing infrared radiation through, to an opaque metallic state at high temperatures, while still allowing visible light to get through. VO2 has its drawbacks, however: it’s not a very good insulator and can only be made at very high temperatures of 420-500?C. 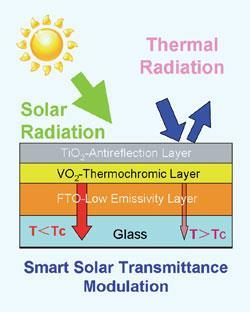 Zhong Lin Wang at the Georgia Institute of Technology, Atlanta, and co-workers at the   Shanghai Institute of Ceramics Chinese Academy of Sciences and the Graduate University of Chinese Academy of Sciences in Beijing, have created a system with improved insulating ability by combining a layer of VO2 with a transparent fluorine-doped tin oxide (FTO) layer coated on glass. As an added benefit, the  FTO layer enhances the crystallinity of the VO2 film - an important factor for improving the material’s performance and reducing its cost - and lowers the synthesis temperature to 390?C.

’Buildings and maintaining man-made structures use 30-40 per cent of the primary energy supply, mainly for heating, cooling, ventilation and lighting. Effective control of the energy exchange between the interior and exterior of buildings through windowpanes is a key area in saving energy,’ says Yanfeng Gao, one of the researchers. ’We conducted this research to create a film that can combine the functions of low emissivity and thermochromic coatings.’

Materials expert Seeram Ramakrishna, from the National University of Singapore, sees advantages to the group’s approach. However, he also feels that improvements could be made to optimise the system. The work ’doesn’t attempt to bring down the transition temperature of VO2  to room temperature, which would be desirable if it is to have practical technological applications,’ he says.

Gao now hopes to realise his dream of seeing the smart windows go into mass production.