Polymer lenses can adjust their focal length in response to temperature and pH.

Liquid lenses that can flex between convex and concave forms in response to a change in temperature or pH could find uses in autonomous imaging systems for medical diagnostics, their inventors say.

Unlike the human eye, which focuses on different distances with the help of muscles that change the shape of the lens, conventional optical devices harboring microlenses require external controls to adjust their focal length.

So Hongrui Jiang, an electrical engineer at the University of Wisconsin in Madison, US, and his team have created self-adjusting lenses from droplets of water, which bulge out through a circular aperture into a film of oil. The curvature of the bulge is controlled by a ring of soft polymer gel, which acts just the muscles controlling the focus of the human eye. The lenses are no more than a few millimetres wide. 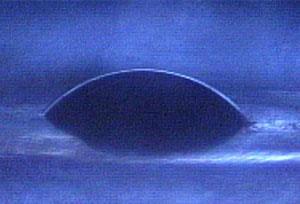 The temperature-adaptive liquid microlens bulges to adjust its focal length

Microchannels allow water to move freely to and from the polymer ring. In response to cues such as temperature or pH, the hydrogel ring either releases or absorbs water, resulting in the contraction or expansion of the ring, and a change in the focal length of the bulging droplet. ’An advantage of these proposed lenses is the ingenious and simple control of curvatures,’ commented Keiji Tanaka, an electrical engineer at Hokkaido University in Sapporo, Japan.

’Our work is unique in that it can realize autonomous adjustment and refocusing without an external control system,’ Jiang told Chemistry World. Since hydrogels belong to a family of polymers that can be tuned to respond to many stimuli including light, electric fields, and biological antigens, ’the lens is both ’smart’ and versatile,’ he explained.

Describing their work in this week’s Nature, the researchers suggest that the lens could be combined into an array, rather like an insect’s compound eye. This could make them useful in more advanced microimaging systems for medical diagnostics or lab-on-a-chip devices.

One limitation is the lenses’ relatively slow response time of tens of seconds. To fix this, the researchers intend to shrink the size of the lens from about one millimetre to tens of micrometres.

Researchers at the University of Hull, UK, have developed a new self-assembly technique to make arrays of microlenses.

If you want to develop high performance materials with nanometre-scale designs and environmentally friendly production processes, you should look to nature for inspiration.