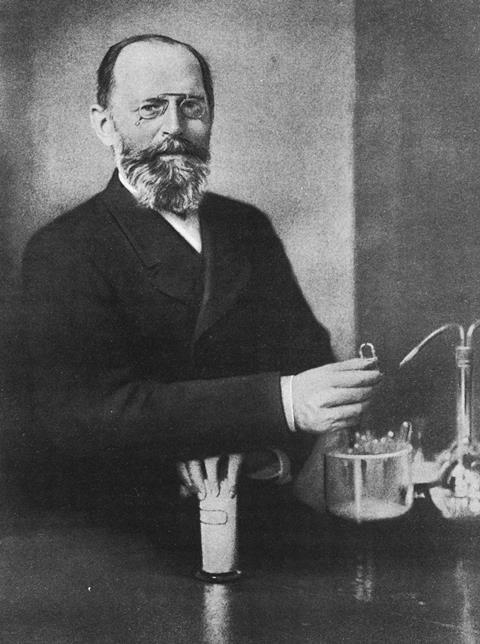 In the 19th century Emil Fischer discovered that acetaldehyde phenylhydrazone had an odd property – the solid had more than one melting point. And this chemical oddity has confounded chemists for over 100 years

Among the many chemical mysteries emerging in the 19th century, acetaldehyde phenylhydrazone (APH) may be one of the strangest and most confounding. German scientist Emil Fischer, winner of the 1902 chemistry Nobel prize for sugar and purine synthesis, first made APH in 1877, while exploring phenylhydrazine’s reactivity. In 1896, he reported that unusually there were three interchangeable forms, differentiated by their melting points, 63−65°C, 80°C and 98−101°C.

The basic science of different solid-state forms was just emerging, so this was an interesting puzzle. Scientists disagreed whether there were two or three forms, and what the exact melting points were. Fischer’s disagreement on the subject with French chemist M H Causse turned especially bitter, but ultimately there were no publications about it after 1913. Modern scientists might assume the differences were because they were studying an impure material. But now, a team of scientists in Europe has dug deeper – and found a previously unknown relationship between crystalline solids and their melted forms.

We were then faced with having the dilemma between re-writing the thermodynamic laws of the universe, or disbelieving the evidence of our own eyes

The mystery was revived in 2008 by Terry Threlfall, who has been a senior visiting research fellow at the University of Southampton since 1999, after retiring from the pharmaceutical industry. After finding Fischer’s study while trawling old German papers, he and his colleagues in Simon Coles’ team made APH for themselves, building on protocols from the 19th and early 20th centuries. In these methods, recrystallising APH from a mixture of water and ethanol with a trace of alkali produces a high-melting-point form. Using a trace of acid instead produces the low-melting-point form.

When they examined the different products using single-crystal x-ray analysis, solid-state NMR and infra-red spectroscopy, they were identical, Threlfall tells Chemistry World. Both exclusively showed the APH with a Z- double-bond isomer. Based on existing knowledge, this should not have been possible. ‘We were then faced with having the dilemma between re-writing the thermodynamic laws of the universe, or disbelieving the evidence of our own eyes,’ he says. 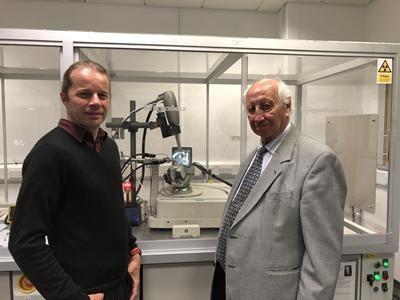 Working in the team of Simon Coles (left), Terry Threlfall (right) revived and then helped solve the 120-year-old chemical mystery of acetaldehyde phenylhydrazone

He then discussed the problem with thermodynamics expert Manuel Minas da Piedade from the University of Lisbon, Portugal, at a conference. Together, the Lisbon and Southampton teams tried various techniques to identify differences. In 2012, they made a breakthrough when they decided to study the different forms’ properties as they melt. NMR found that despite seeming identical as solids, the melts were different. High-melting-point APH, prepared with a trace of alkali, remained as the Z- isomer when melted. The low-melting-point-form, prepared with a trace of acid, transformed to the E- isomer. ‘Manuel was however still puzzled about how this melting transformation could result in a change of melting point,’ Threlfall recalls. 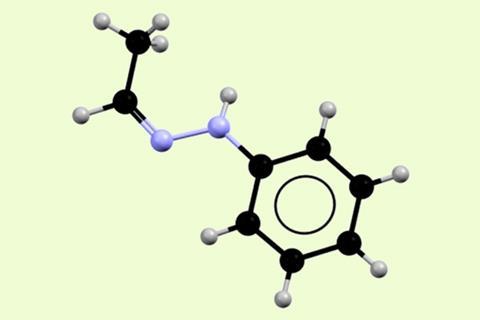 After Threlfall presented these findings at another conference, Hugo Meekes from Radboud University in Nijmegen, the Netherlands, took up the challenge. His team grew APH crystals and studied them using solid-state NMR, following the melting process by varying temperature. They discovered that lingering traces of acid catalyse APH to isomerise in the melted state, and quickly reach a low-melting temperature equilibrium between E- and Z-isomers. ‘In the absence of these traces or in the presence of traces of base to neutralise the acid the isomerisation becomes intrinsically slow for APH, leading to a high observed melting point,’ Meekes explains.

The situation where different solids produce the same melt is well-known, but the same solid forming two different melts is seemingly previously unknown, Threlfall adds. ‘It is likely to be rare, but interesting nevertheless in our understanding of solid-state behaviour,’ he says.

Timothy Easun from the University of Cardiff calls the study ‘a beautiful piece of work that shows how important understanding the non-equilibrium states and minor components of chemical and physical processes can be’. ‘It’s the cautionary tale about the characterisation methods that’s particularly compelling,’ he adds. ‘Only by investigating the dynamic process of melting itself using modern NMR technology was the mechanism uncovered.’

Threlfall, sees a further puzzle in the dispute between Fischer and Causse. Causse had asserted that all conditions used to make APH likely produced a different ‘cage’ structure. Fischer disagreed strongly, but Threlfall has found that Causse was sometimes right. The researchers are trying to work out under which conditions this happens, but ‘so far have met a blank wall’.

Meekes, meanwhile, has been considering the newly-discovered phenomenon when consulting for pharmaceutical companies. One company uses melting point measurements for product quality control, and had to discard batches when values were too high. ‘I am pretty sure the APH case was very different from their problem,’ Meekes stresses. ‘But it made me realise that there might be other compounds that can lead to wrong conclusions by simply measuring the melting point using standard techniques.’