Researchers directly measure binding energy of electrons in aqueous solution, finding that those in bulk solution behave differently to those on the surface

Researchers in Germany have answered a riddle that has been puzzling scientists for decades: why is it that electrons in an aqueous environment appear to exist in two distinct states, with some electrons associating with the water molecules more strongly than others.

It has been known for many years that free electrons in an aqueous solution sit in cavities surrounded by, on average, six molecules of water and are held in place by hydrogen bonds. The binding energy of these electrons has been estimated to be between 3 and 4 electron volts. However, it has been observed that electrons in solution react in a way that suggest that there are some electrons whose binding energy is significantly lower than this.

Now a team led by Bernd Abel, from the University of Leipzig, has directly measured the binding energy of electrons in solution and has solved the mystery.

Abel’s team generated a tiny jet of water in a vacuum and irradiated it to produce electrons. They fired light energy at the jet to eject the electrons, capturing them and spectroscopically measuring their kinetic energy. The difference between the incident energy and the energy of the ejected electron equates to the binding energy of the electron. 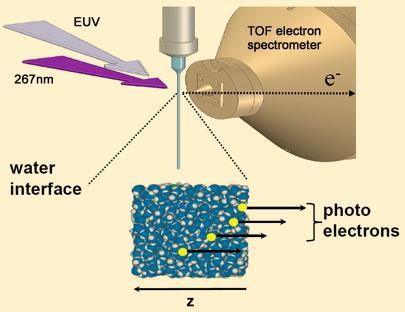 The researchers generated solvated electrons in a liquid microjet with an ultraviolet pulse of 267nm. A microskimmer collected the emitted electrons, which were analysed in a time-of-flight electron spectrometer.

The team showed that the surface electrons were bound with an energy of only 1.6eV, while those from the bulk solution had a binding energy of 3.3eV, in line with theoretical predictions.

It seems that the surface electrons are only partially solvated, Abel says. ’They sit in a kind of half-cavity, held by hydrogen bonds which prevent them from diving back into the bulk solution.’ Significantly the binding energy of the surface electrons is close to the ’accepting energy’ of biomolecules such as DNA, enabling such electrons to interact with chemical bonds in these molecules.

Andrew Ellis, who researches solvation phenomena at the University of Leicester in the UK says, ’previous studies of electrons attached to water clusters in the gas phase have hinted at two distinct environments for the excess electron, one on the surface and the other in the bulk, but the interpretation of these cluster measurements has been controversial.’  The ’fascinating’ study by Abel and his team uses a clever experimental technique, says Ellis, and ’demonstrates that the two-site picture is essentially correct’.

’The stage is now set for follow-up studies to explore the chemical and biochemical implications of these two distinct hydrated electron motifs,’ he says.