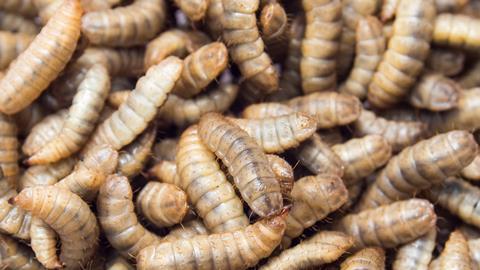 Something fishy about eating insects

While insects as human food remain a novelty in the West, fly larvae grown on human food waste could soon become an important protein source for fish farms

Insects as food has become a bit of a media sensation in Switzerland. Since May, when the country legalised the sale of mealworms, locusts and crickets for human consumption, hardly a week passes without a report of people tucking into bugburgers or insect-loaded power bars. Much of the buzz has come from grocery chain Coop, which carries various products labelled ‘insects inside’.

Coop won’t disclose sales figures, but a spokesman concedes that volumes are small. For now, it’s uncertain how edible insects will catch on Europe. ‘There is a lot of curiosity to try them, but that has yet to turn into repeat purchases in large numbers,’ says one supplier. The prices probably don’t help: bug grub sells for 2–4 times the price of conventional alternatives.

Where insects seem to be making clearer commercial success is in feeding animals. Swiss food processing technology vendor Bühler has partnered with Dutch startup Protix to license a mass-market method for converting black soldier fly larvae into fish food. Fattened larvae have a higher protein content than soybeans, plus a lipid fraction that also can be fed to animals or converted into detergent or cosmetic ingredients.

The approach consists of three main steps, says Bühler process engineer Andreas Baumann. First is slurrifying the insects’ food source: food wastes such as grain residues from spirit distilleries, or okara (the insoluble dregs from soy milk and tofu production) are particularly tasty to Soldier larvae. Fruit and vegetable seeds, pulp and skins are also popular. Second, hatchling larvae are mixed with this feed slurry in stackable boxes arrayed in a warehouse. Conveyors and machines automate the whole process, from monitoring growth to adding food and controlling the climate. Finally, mature larvae are anaesthetised through cooling, then processed to sift excrement and residues from saleable proteins and lipids.

The process is similar to fattening other animals: bugs’ advantage is their efficiency. Because they are cold-blooded, they convert more of their feed into body mass (and therefore food). They are also more edible: 80% of insect carcasses can be eaten, as opposed to only 40% of beef cattle or 55% of pigs or chickens. And because insects can be fed on wastes, several Chinese cities are now building bug-feed plants to process food remnants that currently are landfilled. It’s no coincidence that Bühler has located its insect operations in Liyang, China.

In time, says Baumann and a market study by Dutch bank ABN Amro, insect meal could displace soybeans fed to pigs and chickens, but for now the main target is fish food. As meeting consumer demand from wild sources is unsustainable for many fish species, aquaculture is booming worldwide. This has led to shortages of fish meal (made from processing fish either caught intentionally for processing, or bycatch from other fishing activities) to feed them. Enter insects, which are plentiful and, according to Baumann, should soon become cost-competitive. Bühler reckons that insects could rise to 15% of global protein production by 2050. According to projections by the UN’s Food and Agricultural Organisation, that means insect meal production would total to nearly a billion tonnes a year.