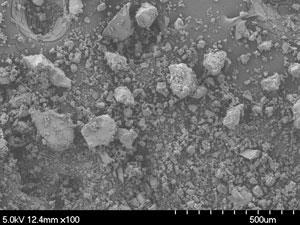 Researchers are using ultrasound to bond nanoparticles – essentially sticking together particles too small to be seen with sounds too high-pitched to be heard. The technique apparently preserves the special properties of nanomaterials, while producing micro-scale particles that are easier to handle.

Jake Barralet at McGill University in Montreal, Canada, and colleagues show they can take nanoparticles, coat them in phosphate and then weld them together in an ultrasonic bath to form microparticles around 200µm in size.

A chance discovery, the team initially assumed the phenomenon was down to shockwaves smashing the particles together – ultrasound causing bubbles to form and burst, generating shockwaves, as well as heat. Then they wondered if hydroxyl radicals produced in the hotspots were responsible. After their experiments failed to confirm these theories, Barralet’s team turned to the more mysterious hydrogen radicals produced in the process.

‘We haven’t got to the bottom of it yet,’ says Barralet. ‘We’re imagining it’s a reaction going on between these radicals and the phosphate.’ Hydrogen radicals exist only fleetingly – for a few nanoseconds – and little is known about them. But that hasn’t stopped the team using the technique to create microparticles of titanium dioxide, nickel oxide and, among others, a cobalt phosphate-carbon nanotube composite that they tested as a water-splitting electrocatalyst. This catalyst cleaved oxygen from water at a much faster rate than an ordinary cobalt phosphate catalyst.

According to Barralet, the particles lost none of the activity they boasted as individual nanoparticles, because their high surface area is retained – the assemblies are extremely porous. So, for example, the photocatalytic activities of their nickel oxide particles show no change between nano and micro form.

Ilker Bayer, a material scientist studying nanocomposites at the Italian Institute of Technology in Genoa, Italy, is excited to see that the ultrasonic technique can bond a number of different nanomaterials. ‘It proves that their process is not selective or sensitive to any nanoparticle type, size, structure or chemistry,’ he says. Although he adds that the presence of phosphates might limit use of the microparticles in applications where unwanted interactions between phosphates and other materials might occur.

The approach could be used to help address safety concerns about nanoparticles. ‘The cost of having to contain these particles is not small,’ Barralet explains. ‘You can have a dust that would disperse in a room and become invisible within seconds. But you can now turn that into a lump of granules that you can pick up safely with your hand and so it exists within the scale that humans work on, and it maintains its chemical functionality.’