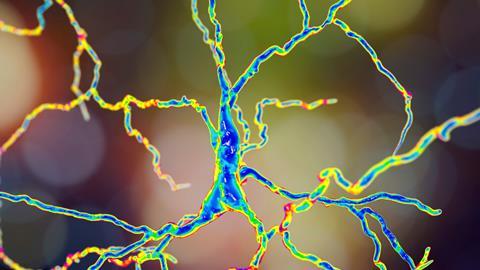 Analysis recognises biochemical changes that are unique to Huntington’s

Scientists have established spectral fingerprints of Huntington’s disease biomarkers. The fingerprints, obtained using a combination of Raman spectroscopy and surface-enhanced Raman spectroscopy (Sers), could form the basis of a tool for assessing the effectiveness of therapies aimed at slowing down the disease’s onset and progression.

Huntington’s disease is an inherited disorder of the brain, characterised by uncontrollable movement and loss of cognitive ability that usually manifests itself between the ages of 35 and 55. Currently, physicians rely on clinical signs such as involuntary movements to monitor disease progression. Tracking the disease using biomarkers has proven difficult, particularly as changes in biomarkers can be associated with ageing or the onset of other diseases that affect the same biochemical pathways as Huntington’s.

Rather than looking for a specific biomarker for Huntington’s disease, Sumeet Mahajan, Roger Barker and their teams at the Universities of Southampton and Cambridge explored using a combination of Raman spectroscopy and Sers to establish a broader disease signature encompassing many biomarkers.

The teams collected Raman spectra by shining a low power laser on microlitre blood samples provided by patients at various stages of Huntington’s disease. They then recorded additional spectral data using Sers, shining the same laser on the blood samples mixed with gold nanoparticles. Raman spectroscopy provided a whole spectrum for all the molecules contained in the blood serum, highlighting key differences at certain intervals in the spectra of healthy patient samples compared to patients diagnosed with Huntington’s disease. Specific peaks of the Sers spectrum stand out due to the ability of certain molecules, such as misfolded proteins and breakdown products of nucleotides and nucleic acids present in the blood serum of Huntington’s patients, to bind selectively to gold nanoparticles. The Sers spectra change as the concentrations of these molecules change as the disease progresses. By analysing both types of spectra, the teams identified a specific combination of peaks occurring in all patients diagnosed with Huntington’s, and analysed how features of this fingerprint changed depending on the stage of Huntington’s disease experienced by the patient.

‘The advantage of our approach is that it is simple. Practically it involves using a tiny amount of serum, obtained from a pinprick. Rather than using the whole spectrum, which will have contributions from all sorts of molecules, we were able to find those parts of the spectrum that had biomarker abilities for diagnosing Huntington’s disease and tracking its progression,’ explains Mahajan. Ultimately this spectroscopic biomarker has the potential to tell patients more accurately when their disease has begun and how it is progressing.

Madeleine Strickland’s research at the laboratory of structural biophysics at the National Institutes of Health, US, focuses on structure-based drug design and NMR spectroscopy. She has high hopes for the future of Raman spectroscopy and Sers in the study of Huntington’s disease. ‘NMR is good at picking out differences and unambiguously assigning peaks to metabolites, while mass spectrometry is really sensitive, so it’s nice to see a complementary technique that could rival them. I was particularly interested in the fact that the gold nanoparticles seem to bind to molecules in the blood that were relevant to Huntington’s.’

Mahajan and Barker already have plans to investigate these specific nanoparticle binding molecules in greater depth, to find out which ones play a role in disease progression. They also plan to revisit patients involved in this research to see how their Sers signature has changed as their condition has progressed. Additionally, Barker says they intend to look at the spectra of patients with the gene for Huntington’s disease who have not yet developed symptoms to pinpoint when biochemical changes begin. ‘We would like to make a portable clinic-ready device that builds on our findings in this work and proceed to testing its clinical deployment to ensure that ultimately our research advance can benefit people.’