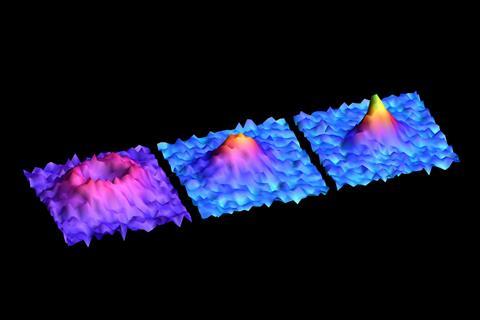 That’s significant because electrons behave like small magnets, described by the quantum mechanical property known as spin, which in each electron can only take one of two states. That’s used for data storage in hard disk drives and by chemists in electron spin resonance spectroscopy. Precisely studying magnetic interactions with electron spins around individual atoms could be powerful in different ways. For example, this ability could help read out information from atoms used in the qubits powering quantum computers. Or using individual atoms to store information might provide extremely high-density computer memory.

Such precise measurements are possible because electrons’ spins interact quantum mechanically when they’re close together. Chemists might know the effect in the form of the Pauli exclusion principle, but the repulsion involved is also known as the exchange interaction, which the Irvine scientists exploit. 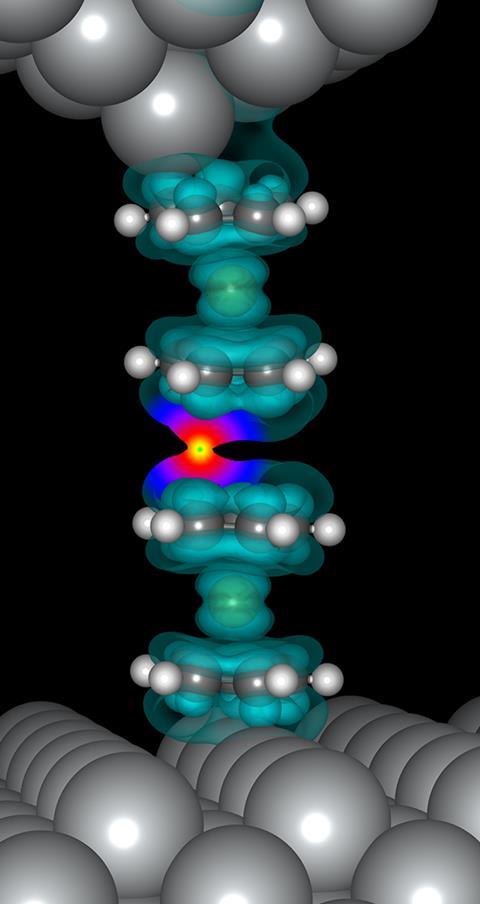 Bringing a nickelocene molecule on an STM tip (top of image) together with another on a silver surface (bottom) allows scientists to measure interactions between their electrons’ spins.

Until now, scientists had thought such measurements weren’t possible because electrons in the STM tip or silver surface would interfere. But nickelocene molecules’ structures are set up perfectly to avoid this. ‘The nickel atom in nickelocene is sandwiched between two cyclopentadienyl five-member carbon rings, thus isolating it from the metal surfaces,’ Ho says.

Not only does nickelocene’s sandwich structure protect against changes to its electrons’ spins, it also means that it binds weakly to the silver surface. That made it easier for the Irvine team to pick up a single nickelocene molecule onto their STM tip. All they had to do was position the tip – a chemically-etched silver wire – less than a nanometre from an individual nickelocene attached to the surface.

With the nickelocene mounted, the team then studied spin interactions using inelastic electron tunnelling spectroscopy, a technique Ho’s team pioneered. Tunnelling electrons from the microscope bounce off and flip the spins of the nickelocene’s electrons, which has an ‘energy cost’ the researchers measure.

‘This energy cost is very sensitive to spin–spin interactions with other nearby magnetic entities, as sensed by the magnetic single-molecule spin-tip,’ Ho explains. The approach can reveal ‘spin states of the single magnetic molecules and the coupled system of two magnetic molecules’, he adds. 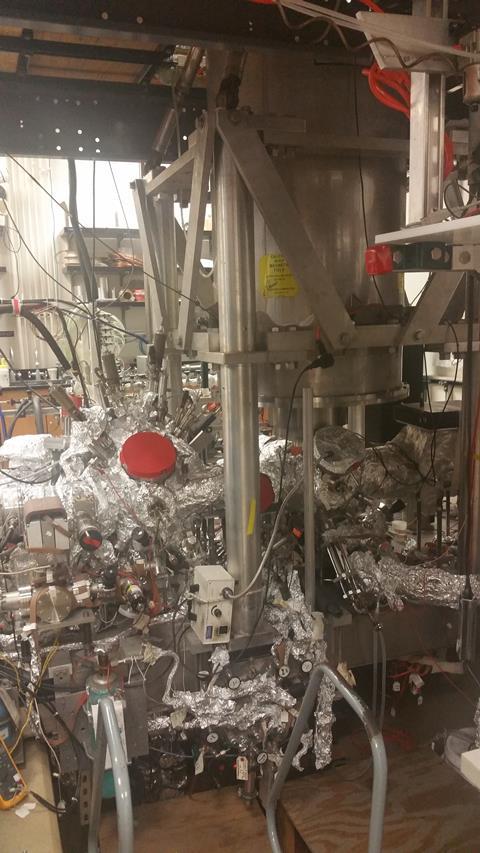 The UCI team’s STM is designed to operate at just 0.6K.

Chris Lutz, senior scientist at IBM in Almaden, US notes that existing magnetic property-measuring approaches use nitrogen atom defects in diamond, but that their resolution is limited. Other STM-based approaches have been hard to reproduce. ‘I expect that functionalising the tip apex with a magnetic molecule will be a highly productive and widely-employed strategy, starting immediately, for exploring magnetism of nanostructures, radicals and organic spin-labelled molecules,’ he adds.

Andreas Heinrich from the Centre for Quantum Nanoscience in South Korea, is impressed that the Irvine team can ‘clearly see differences in the spin–spin interaction when the tip is moved by only a few picometres’. However, he also warns that ‘one has to be an extreme control freak to be able to do this’. That’s because Ho and colleagues exploit very low temperatures – just 0.6K – and high magnetic fields of 9T, and their instrument also has very high vibrational stability.

Ho says that the team will now be looking for other magnetic molecule sensors, and at how magnetic interactions change with time. ‘These experiments show that it is now possible to measure quantitatively the exchange energies and transitions between spin quantum states,’ Wu adds. ‘The availability of these numbers challenges the accuracy of theoretical calculations needed for implementing qubits, quantum sensors and in other quantum information processes.’