Scientists at the University of Cambridge, UK, have devised a new way to make super-strength carbon nanotube fibres. Although individual carbon nanotubes have impressive properties at the nano-scale, it has been challenging to transform the tubes into useful materials.

The new fibres can be woven into body armour or twisted into cables that rival the properties of those used today. Alan Windle, who led the project, told Chemistry World: ’We have demonstrated that perfect carbon nanotube fibres have exceptional strength and stiffness, making them an outstandingly promising material.’ 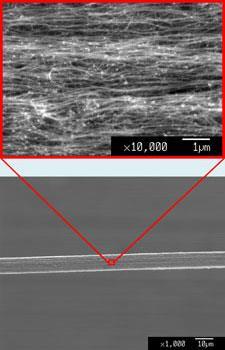 SEM images of a carbon nanotube fibre at different magnifications

There are two important requirements for making high-performance nanotube fibres. Firstly, the nanotubes must be grown to be long and defect-free. Secondly, all nanotubes need to be aligned in the same direction. To achieve this, Windle’s team grew double-walled nanotubes using hydrocarbon feedstock and a ferrocene catalyst to generate an aerogel. Freshly-made nanotubes were then extracted from this at a speed of 20 metres per minute, spinning out into a five-micrometre thick fibre.

In this process, the double-walled nanotubes flatten, increasing the contact area between each nanotube and providing more strength. Also, the density of the fibre is increased by spraying with acetone before collection on a spool. The rapid spinning orients the nanotubes parallel to one another and so maximises the axial properties of the fibre.

Using this technique, individual nanotubes were grown up to 1mm long, 100,000 times longer than the diameter of the tubes. For a scaled-up comparison, this would be equivalent to a hair-thin wire that is 5 metres long.

’Although several miles of fibre can be made every day, the fibre is so thin that even great lengths weigh only a couple of grams,’ said Windle.

Cambridge Universityhave granted a license that allows a spin-out company, Q-Flo Limited, to work on expanding this technology and develop an industrial process that will increase production volume.

Boris Yakobsen at Rice University in Texas, US, has explored the potential of carbon nanotubes for over 10 years. ’This is a remarkable step forward, an order of magnitude increase in performance,’ he told Chemistry World. ’If scaled up, this material could have broad technological impact: body-armour, airspace components, even bridges. With a strength of nearly 10GPa measured on some samples, this might also revive speculations about the ’space elevator’ - only one more order of magnitude would be needed to reach the 65GPa strength required.’

Lianxi Zheng, who works on carbon nanotube synthesis at Los Alamos National Laboratory, New Mexico, US, said, ’It is too early to see real-world uses for these fibres right now. We will need to be making at least kilogram quantities per day and this will take time.’