Squeezable copper–nitrogen compound made under extreme pressure and heat 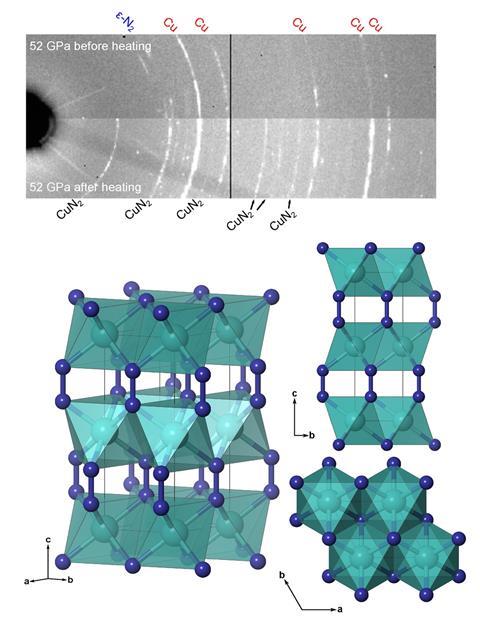 High pressure x-ray diffraction patterns showing (a) the synthesis of CuN2 by laser heating at 52GPa and (b) the crystal structure of CuN2. Copper atoms are green, and nitrogen atoms blue

For the first time copper has been directly reacted with nitrogen to create copper diazenide, CuN2. Unlike many other transition metal–nitrogen compounds, CuN2 was found to be surprisingly compressible because of its weak copper–nitrogen bonds.

There are various platinum group metal nitrides, all of which are ultrahard materials. Little, however, is known about nitrogen compounds of the coinage metals. The only other nitrogen–copper compounds are the explosive copper azide (CuN3) and copper nitride (Cu3N), a semiconductor used in batteries and solar cells. Both these chemicals are made by reacting a copper compound with a nitrogen-containing one, rather than trying to get the two chemical elements to directly react, as occurred with the creation of CuN2.

To make copper diazenide the chemists compressed copper powder in a diamond anvil cell in a nitrogen atmosphere, while heating the setup with a laser. At 50GPa, the two elements form CuN2 in the first reaction of its kind.

Copper diazenide is unusual in several ways. Copper’s oxidation state is not fixed; rather, it lies between I and II. It also has extremely weak and compressible copper–nitrogen bonds, giving it the lowest bulk modulus among the transition metal nitrides, resembling a squishy alkaline earth diazenide. The bulk modulus describes how resistant a substance is to compression.

Since copper diazenide decomposes into its constituent elements below 25GPa, its creators don’t foresee any practical applications for the time being.