US chemists have cracked one of the toughest challenges in organic synthesis: how to attack a complex molecule’s unreactive carbon-hydrogen bonds, without resorting to wasteful synthetic aids like protecting and directing groups.

Christina White and Mark Chen from the University of Illinois say their iron catalyst - which with hydrogen peroxide selectively and predictably oxidises C-H bonds into more reactive C-OH groups - will fundamentally alter the way complex molecules such as drugs are made in the laboratory.

The C-H bonds dotted around molecules are mostly left alone in organic syntheses as they are often very unreactive. Selectively attacking one C-H bond from a complex molecule filled with many other functional groups - in other words, a typical pharmaceutical - is especially difficult: many C-H bonds, if not the entire molecule, are likely to be disrupted. 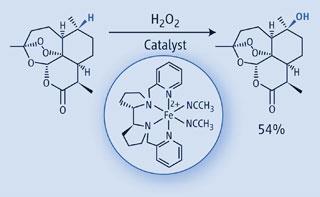 The Chen-White catalyst with hydrogen peroxide selectively hydroxylated the most electron-rich C-H bond in the complex antimalarial, artemisinin

Though platinum and palladium catalysts are able to hydroxylate, aminate, and alkylate C-H bonds selectively, they rely on nearby activating or directing groups - which enhance a C-H bond’s reactivity, or guide a catalyst to one C-H bond in particular - and protecting groups. But these synthetic crutches mean extra steps in a reaction. Only natural enzymes are able to pick out C-H bonds from a complex molecule without help - but their elaborate protein binding pockets mean they only work on specific substrates.

Yet White and Chen’s electrophilic iron catalyst, with hydrogen peroxide, selectively oxidised lone C-H bonds from complex molecules with ease. The new method was demonstrated successfully on several complex products, including the antimalarial artemisinin. Here, one C-H bond out of five was selectively oxidised, in yield higher than that achieved by a previous enzymatic transformation. Particularly impressive was that White and Chen laid down a series of rules predicting the catalyst’s selectivity: depending on the electron-richness of the C-H bond, or whether it was physically hindered from the catalyst’s approach.

’This is an absolutely beautiful piece of work,’ commented Alan Goldman, who works on C-H activation at Rutgers University, New Jersey. ’The ability to functionalise C-H bonds selectively is the ultimate challenge in organic synthesis, with immense potential value.’

The mechanism of reaction is not clear, but White suggests it involves an iron-oxo or iron-peroxo intermediate, with an oxygen atom eventually transferring from iron to form C-OH. Such chemistry has been attempted before, but usually the catalyst decomposes to generate free iron - which with hydrogen peroxide generates hydroxide radicals that wreak havoc on organic molecules. White thinks the key to success this time was making the catalyst’s ligand, which surrounds the central iron, more rigid - meaning that the catalyst decomposed more slowly; though it still stops working after four or five cycles.

Modifying pharmaceuticals to check if derivatives have greater activity has often meant reworking the entire synthesis from scratch, says White. Now it should be easier to simply install OH functional groups near the end of the synthesis.

’The reaction adds a new drawer to the synthetic chemist’s hydroxylation toolbox. One particular application in the pharmaceutical industry will likely reside in the preparation of drug metabolites,’ commented Steven Brickner, who researches antibacterials for pharmaceuticals giant Pfizer.