Stopping obesity in its tracks 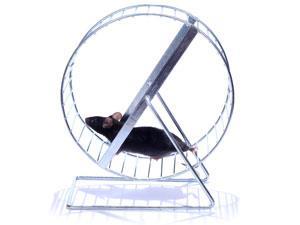 US researchers have discovered that giving conjugated linoleic acid (CLA) to young mice can prevent the development of obesity by increasing their level of physical activity.

Interest in CLA was sparked in the 1980s with the discovery of several beneficial effects, including anti-cancer activity. Since then, due to the ever increasing levels of obesity in developed countries, its effects in reducing body fat have been widely studied.  Prevention of obesity early in development could be more effective in tackling the current obesity crisis than a treatment.

Until now, nobody had investigated the effect CLA could have in young, developing animals. Team leader Yeonhwa Park at University of Massachusetts explains: ‘One of the many suggested mechanisms of CLA's effect on body fat reduction is increased energy expenditure.’ So the team set out to discover whether CLA could increase physical activity and prevent the development of obesity with age.

The team used a mouse model genetically manipulated to make them predisposed to obesity (N2KO mice). They compared N2KO mice to normal mice. Both sets of young mice were fed either a control diet or a diet enhanced with CLA for eight weeks. Their level of activity was monitored using an infrared camera. The team found that the CLA diet prevented the reduction in physical activity usually seen with N2KO mice as they get older. The CLA supplement reduced the weight of both types of mice, but the greatest reduction in weight was shown for N2KO mice because their level of voluntary physical activity was greatly increased compared to the control N2KO mice.

CLA and food science expert Michael Pariza at the University of Wisconsin, US, is positive about the results, which were also well received at the American Chemical Society meeting in Philadelphia in August. He explains that ‘the N2KO mice “slow down” as they age, due in part to changes in behaviour that are likely caused by changes in the regulation of the neuro-hormonal system. This results in excessive body fat gain as the animals age and, in this regard, N2KO mice seem to be a lot like people’.

However, Park says: ‘From previous studies, it is obvious that CLA does not work in humans as efficiently as in mice. But, there are enough promising results of CLA in humans to reduce body fat and improve overall health outcomes.’ The team is now exploring the biochemical mechanisms of CLA in regulating physical activity.