Polymer scientists have joined the race to store hydrogen as fuel.

Polymer scientists have joined the race to store hydrogen as fuel. Their breakthrough could help make the hydrogen economy a reality, they claim. 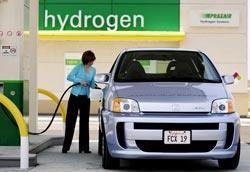 This is the first time a polymer has been seriously considered as a microporous, easily reversible hydrogen-storage material, said Neil McKeown of Cardiff University, UK. The organic materials are polymers of intrinsic microporosity (PIMs). These are fused-ring, rigid but contorted systems that cannot fill space efficiently, and so contain molecular-sized holes. McKeown was investigating PIMs as gas-separation membranes when he noticed gas strongly adsorbing to the polymer membranes.

To confirm the PIMs as genuine hydrogen adsorbers, McKeown’s team measured the pressure drop of a sealed system as hydrogen was adsorbed, and the change in mass of the polymer as it took up hydrogen. The hydrogen is ’physisorbed’ onto the PIM, said McKeown, meaning it is held in place by weak forces, not by covalent bonds, making it easy to remove.

This physisorbtion and reversibility put PIMs ahead of other potential hydrogen storage materials, including conducting polymers systems recently under investigation by other groups, said McKeown.

Peter Edwards, coordinator of the UK sustainable hydrogen energy consortium and professor of chemistry at the University of Oxford, UK, agrees that the PIMs are an interesting development. The fact that they are purely organic is a great advantage, he said.

In the US, targets have been set by the energy efficiency and renewable energy section of the country’s department of energy (DoE): materials for on-board hydrogen storage systems should have a reversible hydrogen loading, weight for weight, of six per cent by 2010, and nine per cent by 2015. The best material so far is nanoporous carbons, which can store almost five per cent hydrogen by weight.

McKeown’s PIM materials can store 1.4 to 1.8 per cent hydrogen by weight at liquid nitrogen temperatures. ’This is some considerable way from the DoE target,’ Edwards noted.

There is a feeling of urgency, from car manufacturers in particular, for a breakthrough in solid state storage materials for hydrogen, according to Edwards. McKeown’s work ’will be a new avenue for the polymer community,’ he said, ’these physisorbed systems have uptake close to zeolites and carbons of the same surface area.’

The US administration is also looking seriously for storage materials to fuel the so-called hydrogen economy, said Edwards. ’The expectation is that $1 billion will be allocated for the race to get the correct hydrogen storage material,’ he said.

McKeown is well aware of the urgency. ’There’s a growing frustration that this problem hasn’t been cracked,’ said McKeown. ’What we’ve got here, although not the final answer by any means, is another route to preparing materials that possibly could have sufficient performance to adsorb hydrogen.’