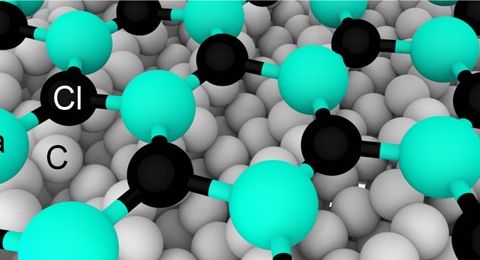 There are still things to discover about ordinary table salt, a research team from Russia has revealed after creating an exotic version of the usually cubic crystal: hexagonal sodium chloride.

2D materials, which are made up of a single or a few atomic layers, have properties and structures that are often very different to the bulk compound. While some, like graphene, have been studied for decades, there are still many – potentially thousands – waiting to be discovered.

With the synthesis of the first hexagonal sodium chloride, chemists have shown again how odd 2D materials can be. Table salt is one of the best known and simplest ionic compounds and the archetypal cubic crystal. Yet when deposited as an ultrathin sheet on a diamond surface it assumes the same hexagonal structure.

The discovery was made with the help of an evolutionary algorithm, which the researchers used to predict crystal structures of sodium chloride on different metal and diamond surfaces. The latter proved to be a hit as salt and diamond showed a strong chemical interaction – a prerequisite for unusual structures.

Electron diffraction and x-ray analysis of samples confirmed that salt-on-diamond really contains hexagonal sodium chloride. As the salt layer’s thickness increases beyond 6nm, the hexagonal structure reverts to the cubic one.

The material’s wide electronic band gap might make it useful for field-effect transistors, the researchers suggest.