This is the first time that strain has been used to construct a ’1D superlattice’ of this sort without the need to fix the particles to a solid surface, said lead author Paul Alivisatos at the University of California at Berkeley. The free-standing colloidal particles ’can go where particles on a substrate can’t go,’ explained Alivisatos, opening up a host of biological and other applications. 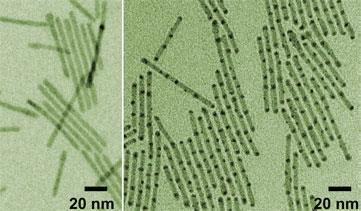 Silver was incorporated into the pure CdS nanorods by cation exchange, then strain helped to form the regular pattern of silver quantum dots

Alivisatos’ team took nanorods less than 5nm across made of pure semiconductor cadmium sulfide. They then swapped some of the cadmium atoms for silver. This cation exchange created random islands of Ag2S within the CdS rod. The spacing between the atoms is different in these regions, so strain arises where they meet. ’When you match them together they tug on each other,’ said Alivisatos, and this makes the silver islands seek each other out and form larger quantum dots to reduce their surface size. Eventually the silver dots grow into stripes, trapping layers of cadmium atoms that now have nowhere to go.

Strain has been viewed as a ’nuisance’ by most nanochemists, said Alivisatos. ’Hopefully this will make them see it differently,’ he told Chemistry World. He now has big ideas for his little rods.

’A series of dots in one rod is potentially useful in biological imaging since they emit in the near infra red which is a convenient window,’ he said. He also expects that having several dots connected together in this way will mean an increase in signal strength where they accumulate: ’Wherever one goes they’ll all go,’ he said.

Reducing the gaps between the silver dots is now key to improving the rods, said Alivisatos. ’If the dots are close enough that electrons can tunnel between them, this would be the most interesting, but we’re not close enough right now’, he said. ’If we can engineer the composition and diameter of the rods so they are closer, maybe by half the distance, the electrons might be able to hop.’

This would offer a new system to study quantum behaviour but could also be a template to improve nanoparticle solar cells. When quantum dots absorb light they generate charges but it can be difficult to get them into a circuit. Alivisatos believes the rods could act as nanowires carrying the charges along their length to be collected at the ends. ’This is where we would like to go; where we retain many of the optical properties but have better electrical properties.’

"They could form the basis for a whole new class of single-molecule devices" - John de Mello, Imperial College, London, UK

John de Mello, a nanochemist at Imperial College, London, UK, said the work was ’very elegant’, noting that the chemistry involved could be reproduced with other common nanomaterials such as CdSe and CdTe. De Mello is very interested to see how well the superlattices can transport charge. ’In principle, they could form the basis for a whole new class of single-molecule devices,’ he said.