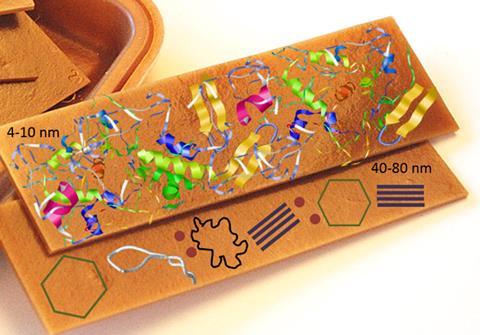 The bioplastics made from modified plant gluten can form more crosslinks, which increases its strength and elasticiy

Swedish scientists have selected the growing environment and genetic background of wheat to give plants that produce stronger gluten proteins. They used this gluten to make bioplastic films with improved strength and elasticity.

Manufacturers produce 200 million tonnes of plastic from fossil fuels annually. These materials are not biodegradable so cause significant waste disposal issues, whilst relying on a dwindling feedstock. Biodegradable bioplastics, made from plant-derived biopolymers, such as wheat gluten, are an alternative. However, they suffer from poor mechanical properties when compared with conventional plastics, requiring harsh chemical processing to improve their durability.

In contrast, the method proposed by Faiza Rasheed and colleagues at the Swedish University of Agricultural Sciences turns plants into a kind of green factory that bolsters gluten within them.

The team grew two wheat genotypes under different temperature and nitrogen regimes to assess the effect of these factors on the extracted gluten. One genotype contained a stronger form of gluten with more available cysteine residues to form crosslinks. Growing this high-cysteine genotype at elevated temperatures and exposing it to nitrogen early on, also affected the secondary structure of the gluten, increasing the ß-sheet content. ‘We extracted pristine gluten in a milder way, which preserved its native structure, resulting in hierarchical nano-structural arrangements, which translated to an increased film strength and elasticity,’ explains Rasheed.

These films are not currently suitable for plastic packaging due to moisture sensitivity issues, but the research highlights the potential to use plants as biochemical modifiers, a potentially valuable technique for the blossoming bioplastics industry. Paul Fowler, executive director of the Wisconsin Institute for Sustainable Technology in the US tells Chemistry World, ‘This work makes a significant step in beginning to address performance-in-use limitations of gluten-based films and provides a glimpse of the possibilities of novel, commercial in planta biopolymer production.’ The team intend to modify the bioplastics further, to develop sustainable packaging materials for fruit.