A potential vaccine against the deadly bacterium Clostridium difficile

A carbohydrate from the surface of the most virulent strain of the bacterium Clostridium difficile has been synthesised by chemists in Germany. The molecule could be used to develop a vaccine against the infection.

C. difficile infections are the most common cause of hospital acquired diarrhoea and can lead to the death of elderly patients and those with weakened immune systems.’C. difficile is on the rise in industrialised countries,’ says Peter Seeberger, who led the team that carried out the research at the Max Planck Institute of Colloids and Interfaces, Potsdam. ’There is a need for a vaccine but it’s a big challenge.’ 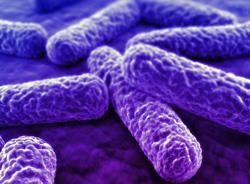 Clostridium difficile, a bacterium that causes hospital acquired infections, is on the rise in industrialised countries

The majority of severe infections are caused by just one hypervirulant strain - type 027. Antibiotic resistance and the tough nature of the C. difficile bacterial spores mean that treating the infection with antibiotics can be ineffective.

To fight this particular strain, Seeberger and his team synthesised the repeating unit of a carbohydrate - pentasaccharide PS-1 - that is only found on the surface of type 027. The linear synthesis involved using one precursor molecule to make four different building blocks, making an efficient process. Their aim is to use PS-1 to create a vaccine to enable the immune system to recognise it, make antibodies against it and mount a response against the infection.

’It is elegant chemistry and shows that if you master the challenges of synthetic carbohydrate chemistry, you can produce something that’s medically useful,’ says Gerd Wagner, a medicinal chemistry expert at King’s College London, UK, who agrees that the research ’opens the door to exploring a vaccine candidate’.

Seeberger’s team was also the first to synthesise PS-2, a carbohydrate found on all strains of C. difficile. He states the possibility of ’combining PS-1 and PS-2 in a single vaccine candidate for better coverage’. His team has begun tests using PS-1 attached to a protein carrier to determine whether animals can create antibodies against it. It will be years before a vaccine is available, he says, but he emphasises that PS-1 and PS-2 are both promising candidates.