Metal sulfide removes radioactive strontium from a mix of ions

A new material that can extract radioactive strontium ions from solutions could help to clean up nuclear waste, according to researchers in the US [1].

’The nuclear power process generates enormous amounts of radioactive liquid waste, which is stored in large tanks,’ says Mercouri Kanatzidis, leader of the research team at Northwestern University, Illinois. ’If we can concentrate the radioactive material, it can be dealt with and the non-radioactive water thrown away.’

Strontium-90 is a particularly harmful component of nuclear waste with a half-life of about 30 years. It can replace calcium in bone if it gets into the food chain and causes health problems including cancer. 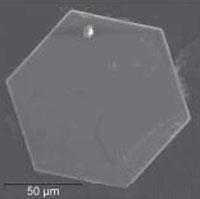 Scanning electron microscope image of a typical crystal of KMS-1

But finding Sr2+ ions is like searching for a needle in a haystack: non-radioactive ions of sodium (Na+) and calcium (Ca2+) are a million times more numerous, positively charged and around the same size. Current nuclear waste treatments are not effective at distinguishing between these different metals, which can frustrate cleaning efforts. Kanatzidis’ team have previously designed methods to trap heavy metals like mercury and arsenic [2]. This time they used a layered metal sulfide called KMS-1 containing potassium, manganese and tin. This material is a simple ion-exchanger, capable of swapping potassium ions for heavier ones - and then holding onto them.

They tested KMS-1, which looks like a brown powder, by packing it into porous bags similar to tea bags. When they dipped the bag into a sodium-rich solution of strontium - resembling the conditions in nuclear waste - it removed 99.8 per cent of the strontium. ’The metal sulfide did much, much better than we expected at removing strontium in such an excess of sodium,’ said Kanatzidis.

The material works by preferentially binding to strontium in two ways. Firstly, the sulfide groups on KMS-1 make it more ’soft’ so it is more easily polarised and favours the heavier strontium ions over calcium ions. Secondly, KMS-1 binds more strongly to ions with a higher charge, so strontium, which has a charge of 2+ is trapped more effectively than sodium, which only has a charge of 1+.

"The metal sulfide did much, much better than we expected at removing strontium in such an excess of sodium" - Mercouri Kanatzidis

Importantly, KMS-1 works well in both very basic and very acidic conditions found in different nuclear waste. It is also easy to make from inexpensive materials. The team envisage that KMS-1 could form part of a filter that nuclear waste could be passed through.

’This research is interesting and could be very useful,’ said Abraham Clearfield, an expert in designing ion-exchange materials at Texas A&M University. ’However, it is too early to say how effective this will be. There are many other factors involved when dealing with real nuclear waste.’