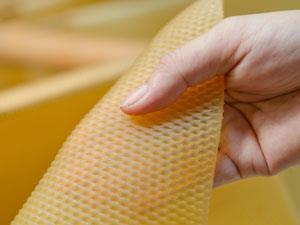 Latex could one day find its way into specialised sunscreens

Scientists in France have made a water-resistant latex film loaded with a UVB filter that could be applied as a thick, uniform layer of sunscreen to wounded skin, which is more susceptible to UV damage.

The film, made of nanostructured latex, was built up of soft-core and hard-shell layers by Aggeliki Triftaridou and colleagues at ESPCI-ParisTech, Paris. An amino acid-based surfactant was used as an emulsifier in the place of volatile organic compounds (VOCs). Elimination of VOCs, traditionally used for their plasticiser effect, is the concept of this work, as Triftaridou explains: ‘The use of an amino acid-based surfactant as an emulsifier rendered the film environmentally friendly and biocompatible, and conferred better mechanical properties to it.’ In the absence of VOCs, the film was cast by water-evaporation, which meant loading an organic UV absorber was going to be challenging.

The team chose 2-ethylhexyl-4-methoxycinnamate (EMC) as their UV absorber over aesthetically less pleasing inorganic absorbers, such as titanium dioxide, which causes whitening of the skin through UV reflectance. EMC is used in more than 75% of sunscreens, is highly water insoluble and rarely results in photoallergic reactions. Triftaridou and her team fed EMC directly into the monomer mixture in the reactor in either the core- or the shell-forming step, successfully loading EMC directly into the films without the need for VOCs.

When exposed to UV light, the EMC-loaded film gave zero transmittance values, which demonstrates its sunscreen properties. Also, the film was able to completely block UV light after being soaked in water for one month or soaked for one month and exposed to sunlight for four days. The water-resistant property of the film is particularly exciting as Triftaridou points out that ‘unlike common sunscreen formulations, the UVB shielding ability remains intact, even after soaking in water’. The film also adapts easily to skin motion and is non-sticky to the touch, which as Triftaridou says originates ‘partially from their lightly cross-linked nature and partially from the presence of a continuous hard phase formed by the shells of the soft-core hard-shell particles’.

Jean-François Lutz, head of the precision macromolecular chemistry group at the Institut Charles Sadron, Strasbourg, France, thinks that ‘there are two main innovations in the work: the water-borne core–shell latex that is easy to make and is environmentally friendly; and the utilisation of these latex films as sunscreens’. He thinks the films provide an ‘excellent alternative to all existing commercial products’, adding that ‘this is a clever material with a real commercial potential’.