Chinese scientists have made super-buoyant miniature boats from copper mesh coated with silver.[1] Despite looking like sieves, the boats are so buoyant that if they were scaled up to the size of a life-jacket, they could keep a horse afloat, the researchers say.

Although the material could prove impractical to scale up to the size of a life-jacket, the Chinese team hopes that with further research the mesh could be used to design some novel aquatic devices.

The matchbox-sized boats were made from a copper mesh with millimetre-sized pores, which was then coated with tiny deposits of silver - research which extends earlier work by Iain Larmour and colleagues at Queen’s University, Belfast, UK.[2] The coating creates a ’super-hydrophobic’ water-repelling microstructure similar to the tiny hairs coating the legs of pond skaters. The secret to the pond skater’s ability to ’walk’ on water comes from the way these hairs trap air pockets between the legs and the water, creating a cushioned layer that cannot break the water’s surface tension. 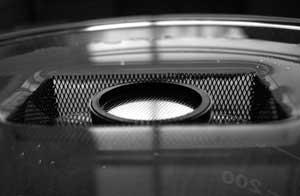 ’On the outer surface of our boats, there is effectively an air film surrounding the surface that prevents the boat from direct contact with water,’ explains Qinmin Pan, who led the research at the Harbin Institute of Technology in Harbin, China. ’We found that the presence of this film increases the amount of water the boat can displace, leading to a large loading capacity.’

Pan’s boats managed to keep floating despite holding nearly 15g of weight, compared to untreated mesh boats that could hold only 3.3g before sinking. The boat also displayed some unusual properties, such as being able to continue floating despite being submerged just under the water: thanks to a curved meniscus that forms at the water line.

By reducing the pore size and tweaking the materials involved, the team are confident that they could make some of the most buoyant materials ever - which would have great potential in creating futuristic surveillance robots or environmental monitoring devices.

Another avenue of investigation is using the coatings to reduce fluidic drag, allowing boats to travel more quickly. This is already a reality in aeroplanes, where super hydrophobic coatings have been applied to surfaces to keep them dry.

Robert Cohen, an expert on super hydrophobic materials at Massachusetts Institute of Technology, US, is interested by the Chinese research, but notes that the miniature boats may behave differently in real-world conditions, since super-hydrophobic materials can be affected by pressures such as depth or harsh weather conditions.

Larmour also warns that as the process requires an entire object to be coated in order to float, so will only be applicable on a small scale. His own team set out to tackle this problem by further developing the material to be applicable to copper powder.[3] ’This powder could support large external loads and does have extensive possibilities in the area of industrial scale application to marine structures of all kinds, be it tankers or oil rigs, with the clear benefit that it can be prepared in batches and applied as a final coating onto the desired structure’ he explained.