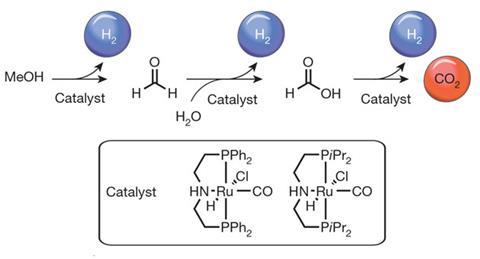 Scientists in Germany and Italy have discovered a way to derive hydrogen gas from methanol at low temperatures and pressures using soluble ruthenium-based ‘pincer’ catalysts. The finding is potentially significant because it opens the way to using methanol as a hydrogen carrier for proton-exchange membrane fuel cells in vehicles. Such fuel cells consume hydrogen gas to create electricity, with water as the only by-product.

Fuel cells can run on methanol, but these are much less efficient, durable and stable than hydrogen fuel cells. The problem with using hydrogen in vehicles, however, is that as a gas it is difficult to store and handle. The process of degrading methanol to form hydrogen – called reforming – is well known, but requires temperatures in excess of 200°C and high pressures, making it impractical for use in, for example, cars.

‘Ideally we would like a liquid energy carrier, so it is of interest to use methanol as a carrier for hydrogen if we can do the conversion efficiently,’ says Matthias Beller of the University of Rostock, Germany, who led the research.

The team developed a range of soluble catalysts in which a central ruthenium is clamped by a nitrogen and two phosphoruses, themselves attached to organic groups. In the presence of water and sodium hydroxide, the catalyst accelerates the conversion of methanol to formaldehyde, releasing hydrogen. The formaldehyde is then itself further transformed to formic acid, again with hydrogen being produced, and this in turn is split into hydrogen and carbon dioxide. Unusually, therefore, the single catalyst reacts with three different substrates as the reaction proceeds, and for each molecule of methanol consumed, three of hydrogen are liberated. Crucially, the reaction runs at temperatures below 100°C and at ambient pressure, making it feasible to incorporate into a practical fuel cell system, says Beller.

The number of molecules of hydrogen generated per molecule of catalyst consumed and the rate of hydrogen production are both good, says Beller, but would need to be improved. ‘The beauty of organometallic chemistry is that you can fine tune and change your system in so many ways,’ he says. He is confident that efficiencies can be increased by tweaking the chemistry.

The relatively high energetic cost of producing methanol, however, remains an immediate impediment to its use as a hydrogen carrier. Valerie Dupont of the University of Leeds, UK, who researches hydrogen production by advanced steam reforming processes, says: ‘They have achieved a difficult thing to do, but until there is a significant reduction in the cost of producing methanol in the first place then this may remain a niche application.’