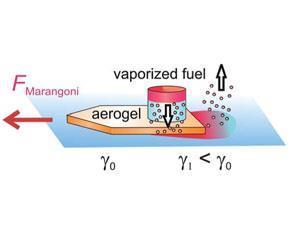 A small autonomous boat powered by a volatile surfactant has been developed by scientists in Finland and Israel. The surfactant modifies the surface tension of the liquid it floats on to create a surface tension gradient that propels the boat forward.

Propulsion induced by a surface tension gradient is known as Marangoni propulsion. It’s used in nature by small creatures such as Microvelia (small aquatic insects) to give a burst of speed to escape predators. In man-made devices, the Marangoni effect has been used to power small ‘camphor boats’ and ‘soap boats’; however, these systems normally offer only short term propulsion or require the boat to be confined to specific channels.

To develop a longer-term propulsion system, the team led by Robin Ras at Aalto University, Finland, created a boat from a lightweight membrane made from a nanocellulose aerogel. The membrane is impermeable to water (and oil) but it allows the gaseous surfactants to pass through it. The team used ethanol as the fuel to power a boat floating on water.

‘The boat ran for over 54 minutes on only 25 microlitres of fuel,’ says Ras. ‘It’s very fuel efficient while cruising at a speed of 2cm s-1,’ he adds. To demonstrate the generality of their approach, the team showed they could also use pentane to power a boat floating on paraffin oil.

‘This is a beautiful illustration of exciting soft matter research. The researchers combine innovative materials science with fundamental surface science to construct a novel self-propelling floating device that is much more controllable and versatile than any similar device suggested before,’ says Lennart Piculell, an expert in physical chemistry at Lund University, Sweden. ‘I don't see any immediate applications, but the concept is simple and can be applied to even smaller devices.’