A UK researcher has proposed a new process to decompose waste desalination brine using solar energy that could allow desalination plants to act as a sink rather than a source of atmospheric carbon dioxide, and help to neutralise ocean acidity.1 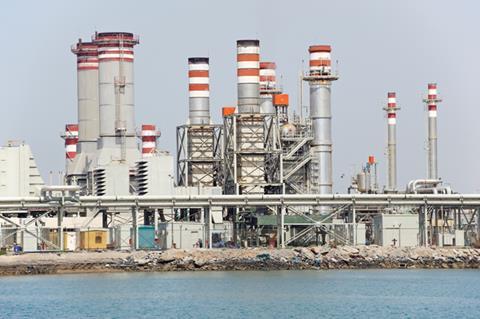 Approximately 30 billion m3 of freshwater is produced by desalination each year, and this is predicted to double within the next decade to meet global demand.2 To combat the increased energy consumption and carbon dioxide emissions associated with this growth in capacity, research efforts have turned to employing renewable energy.

In the system devised by Philip Davies at Aston University, magnesium chloride in waste brine is hydrolysed by energy generated by heliostat fields to magnesium oxide, which is discharged to the ocean. Due to its alkaline nature, this subsequently neutralises ocean acidity and gradually removes carbon dioxide through the conversion of magnesium oxide to bicarbonate, similar to ocean liming, with the advantage that the neutralising material is sourced from the seawater itself rather than mined. Hydrochloric acid produced as a byproduct could potentially be sequestered into silicate rocks.

Although this approach would increase the energy requirement of the plant by 50%, Davies calculates that this is offset by the carbon dioxide absorption capacity; each plant would remove 18,200 tonnes of carbon dioxide per year rather than emitting 5300 tonnes. This would result in 0.4% of anthropogenic carbon dioxide emissions being absorbed given a doubling in the current desalination capacity.

Davies acknowledges that lowering the energy required to dewater brine prior to decomposition would be a major benefit. ‘Not much energy is needed to decompose magnesium chloride in brine to magnesium oxide, which makes the use of solar energy potentially very attractive,’ he says. ‘If we could find better ways to dewater the brine this would become very energy efficient as a means of avoiding carbon dioxide.’ He also warns that the effects of magnesium oxide discharge on local marine environments should be thoroughly assessed, a sentiment echoed by Silvano Mignardi, an Earth scientist at the Sapienza University of Rome in Italy: ‘Environmental issues involved in the ocean discharge of magnesium oxide and in the management of hydrochloric acid have to be carefully evaluated.’

Phil Renforth, a geo-environmental engineer from Cardiff University, highlights that a major advantage of Davies’ process is that it can be appended to existing technology. ‘This approach may allow the industry to transform itself from a carbon dioxide villain into a force for good in the climate change debate.’