Hopes for a new type of HIV therapy have been raised by the first chemical synthesis of a scarce plant compound which flushes the virus out of hiding. 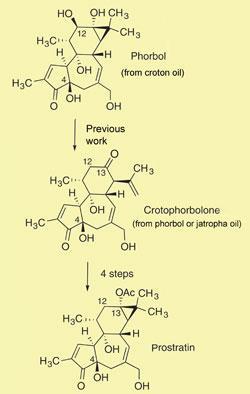 Though antiretroviral therapies attack actively replicating HIV, they don’t reach the latent form of the virus which hides in blood cells throughout the body. It takes decades of intensive anti-retroviral treatment to wear down these HIV reservoirs; and as soon as treatment is stopped, the dormant virus resurfaces.

Some studies have flagged up compounds that activate hidden HIV, and might be taken in combination with antiretrovirals to boost their impact. Among the most promising of these, prostratin, can only be obtained from a handful of plants, including the bark of the Samoan mamala  tree (Homalanthus nutans). But scientists have found it difficult to study prostratin and other related molecules because mamala bark is in short supply.

Now, Paul Wender and colleagues at Stanford University, California, have worked out how to synthesise prostratin and a related molecule, DPP, from readily available seed oils. ’I think this could be a practical supply route for clinical quantities of this material,’ Wender told Chemistry World.

Wender’s team synthesised prostratin and DPP in four steps from crotophorbolone - which can be obtained by hydrolysing esters extracted from the oil of the Jatropha  plant, a renewable feedstock currently being considered for biodiesel. The researchers have also made crotophorbolone from phorbol, a diterpene which can be isolated from croton oil, squeezed from the seeds of the shrub Croton tiglium.

’The chemistry which they developed to carry out the partial synthesis is impressive. I would not put it in the "rocket science" level but that’s really not the point in this project,’ comments Samuel Danishefksy, who works on synthesising medicinal natural products at Columbia University, US.

Stephen Brown, director of clinical research at the California, US-based AIDS Research Alliance (ARA), says the synthesis will allow researchers not only to rapidly produce prostratin, but also to make and screen structural analogues with potentially improved activity. ’These compounds represent a new class of HIV targeting compounds, HIV reservoir ablative agents (HRAA’s) that represent a step forward in the targeting of the HIV viral reservoir,’ he says.

In 2001, the ARA was granted a license by the US National Institutes of Health to develop prostratin. Brown says the ARA is now conducting ’ongoing clinical work’ on the drug, and is ’poised within weeks to submit to the FDA our pre-IND (investigational new drug) consultation request to review our proposed remaining preclinical work.’ The drug is not yet ready for human trials.